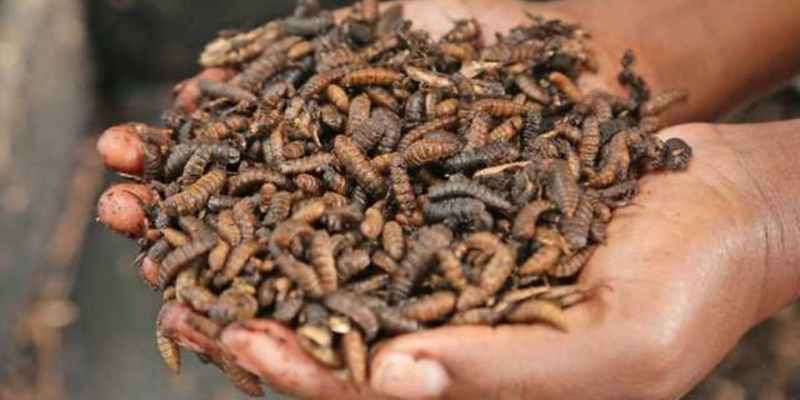 Having the larvae in feeds increases the wealth of beneficial bacteria in the gut of the birds, thus promoting their overall health and growth.

The application of antibiotics to enhance growth or manage diseases in poultry has often been useful, but there have been concerns about the rising resistance to them by harmful bacteria in the birds.

Beyond being a threat to them, it also has adverse implications for human health. The resistant bacteria, or the detrimental residues from the antibiotics, could be transferred to people through products such as eggs and meats. Thus, many countries have introduced bans or severe restrictions on the use of antibiotics in poultry, warranting the search for alternatives.

One of the most effective ways of producing healthy poultry without relying too much on antibiotics is by maintaining optimum gut health in the birds. This depends on the delicate balance between poultry, their cells and those of the bacteria, the intestinal environment, and how the poultry are managed, among other things.

Recently, researchers from the International Centre of Insect Physiology and Ecology (Icipe) discovered that the addition of black soldier fly larvae into poultry feeds increases the wealth of beneficial bacteria in the gut of poultry, thus promoting the overall health and growth of the birds.

The new study, published recently in Scientific Reports journal, indicates that the friendly bacteria microorganisms are vital for strengthening the immunity, physical fitness, and nutritional development of poultry.

The beneficial bacteria form a protective barrier that lines the gut, preventing the growth of harmful bacteria such as salmonella, campylobacter, and clostridium perfringens, which are among the leading causes of foodborne diseases worldwide.

They also influence the development of poultry by enabling fermentation of the plant fibers, which the birds would otherwise be unable to digest, and which boost the release and absorption of nutrients.

“Lactic acid bacteria are reputed for fermentation of carbohydrates and produce two types of acids – lactic and acetic, which help to create a balance in the gut and stimulate growth of beneficial microbes. These bacteria also produce compounds known as bacteriocins, which prevent the development of disease-causing agents in poultry,” observed Dr Fathiya Khamis, Icipe senior scientist and lead author of the study.

“The most significant factor that influences the composition of the gut microorganisms in poultry is diet type and feed quality. Our research has demonstrated that insect-based poultry feeds can increase the abundance, diversity, and composition of beneficial bacteria,” says Ms Evalyne Ndotono, a Kenyan scholar who conducted the research as part of her MSc studies at Icipe, while registered at Jomo Kenyatta University of Agriculture and Technology (JKUAT), Kenya.

Other options include reshaping the gut microbiota through the administration of probiotics and prebiotics. Probiotics are supplements made from strains of beneficial microorganisms such as bacteria and yeast, which can improve or maintain the good bacteria diversity in poultry. Prebiotics are nutritional compounds found in foods (typically high-fibre foods) that can induce the growth or activity of the beneficial microorganisms in poultry.

Other options include reshaping the gut microbiota through the administration of probiotics and prebiotics. Probiotics are supplements made from strains of beneficial microorganisms such as bacteria and yeast, which can improve or maintain the good bacteria diversity in poultry. Prebiotics are nutritional compounds found in foods (typically high-fibre foods) that can induce the growth or activity of the beneficial microorganisms in poultry.

“Of the three lactic acid bacteria that we identified; the lactobacillus species has the most potential as a probiotic candidate. Future studies could focus on extracting cultures of these bacteria from poultry, identifying the effective strains, and establishing ways through which they can be developed into probiotic products,” explains Dr Khamis.

In addition, the lactic acid bacteria break down the non-digestible carbohydrates to produce compounds such as lactose and sucrose, which are raw materials for prebiotics. The lactobacillus bacteria species also have numerous health benefits for people. They are known to stimulate immune responses, to have anti-cancer activity, and to prevent and contribute to the treatment of inflammatory diseases. They also help to alleviate lactose intolerance, and to fight resistant pathogens and respiratory viral infections. Globally, there is a continued search for new strains of these bacteria. Thus, poultry may present new sources from which to isolate them.

“This research is part of Icipe’s ongoing efforts to harness the potential of insects in the transformation of the current food system into a more sustainable and vibrant circular economy,” notes Dr Segenet Kelemu, Icipe director general & CEO.

She adds: “In regard to black soldier fly, in addition to its animal feed benefits, our research has demonstrated the insect’s utility in organic waste recycling to produce high quality, nutrient rich fertilisers that improve soil health and crop yield, and in the development of pest control products.”

The study provides further momentum for insect-based enterprises, building on the firm base laid by Icipe and partners.

This includes establishment of cost-effective insect rearing, harvesting and post-harvest techniques, which have been adopted effectively by smallholder and medium scale producers in East Africa.

These efforts have been supported by a wide network of partnerships, massive capacity and awareness building, as well as the development of policies and national standards, and creation of marketing linkages, for insect products, including those from black soldier flies, in East Africa.

There is also rising acceptance among consumers for products, like eggs and meat, produced using insect-based feeds.

Moreover, evidence shows that insect-based enterprises can be undertaken with minimal inputs. Therefore, they are ideal for women, young farmers, and low-income households, who are often constrained by limited access to agricultural resources, says the study.