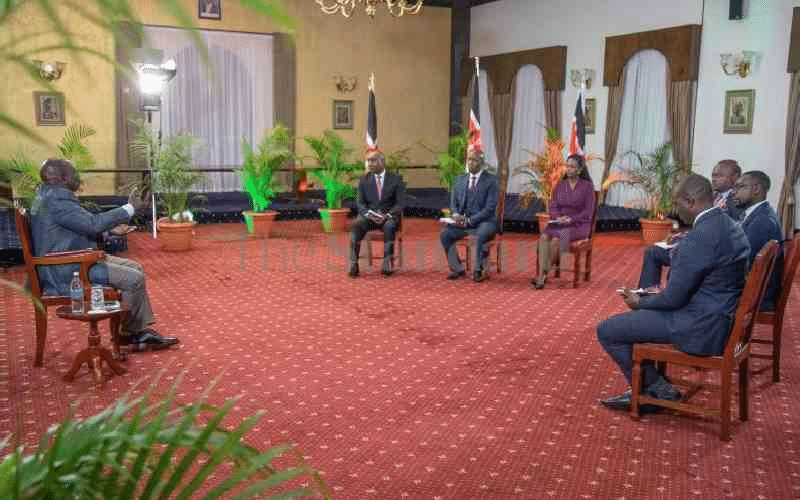 “I am a scientist… I would not endanger the lives of those who elected me,” Ruto said

President William Ruto has defended the government’s decision to import 10 million bags of genetically modified (GMO) maize, saying that most foods imported into the country have less than one per cent GMO content as directed by the Kenya Bureau of Standards (KEBS).

According to the President, biotechnology foods are safe for human consumption and have no negative impact on people’s health whatsoever, and as such there should be no reason to oppose their importation.

“As the President of this country, I cannot endanger the lives of citizens who elected me,” he said during a Live TV interview.

“I am personally a scientist. All scientists in Kenya, as well as every university in the country agree with me that GMO foods have no problem at all,” he reiterated.

In November, Trade and Investments Cabinet Secretary Moses Kuria announced that the country would allow duty-free importation of 10 million bags of GMO maize for six months to address a grain shortage.

He said at Strathmore University that the government was prepared to weather condemnation from anti-GMO advocates to do so.

Ruto who underscored his intention to make the country food-secure gave an example of countries like South Africa and the United States, which he said consume food products that are purely genetically modified.

The whole of South Africa is 100 per cent GMO

The Head of State accused persons and entities opposed to GMO of carrying out a ‘propaganda’ campaign when in actual sense ‘they do not want us to have the capacity to produce sufficient foods.’

Most imported foods have GMO components capped at 1 per cent

“I have personally fed on GMO foods, have I grown breasts? We must tell each other the truth and stop the gossip and propaganda. My intention is to ensure we have a plan to address the challenge of high cost of living,” he said, adding that in fact, most food products Kenya has been importing “all these years have GMO components.” The Kenya Bureau of Standards only kept it at one per cent.

“When you are told that this food is less than one per cent GMO, what are you saying, isn’t it just GMO?” he posed, noting that the same food products cost the country 30 to 40 per cent more than what would have been spent on of bioengineered foods.

The fact that there are people who still go to bed without food in Kenya, 60 years after independence, is a great indictment on the part of leaders, he said.

Lawsuit against lifting of GMO ban

Kenyan Peasants League, a lobby representing small-scale farmers, filed a lawsuit against the lifting of the ban.

The lobby alleged that GMO products pose a health risk, particularly to the poor and those with low incomes, and that the government lifted the ban without sufficient public participation.

In December, the High Court suspended the government’s plan to allow the importation and distribution of GMOs pending the determination of the lawsuit.

Notwithstanding the ongoing debate, the government continues pushing forward with its plan to embrace GMO.