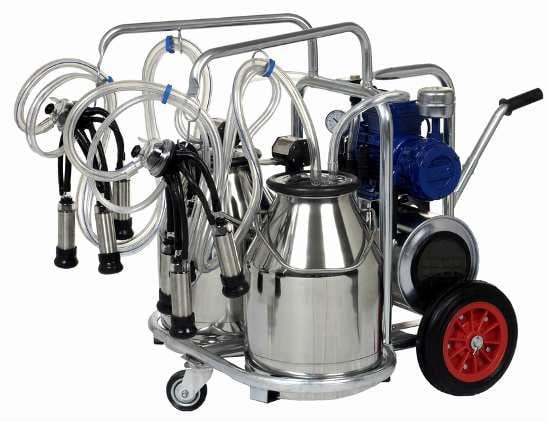 Mr Wilson Kirwa is an eldoret-based farmer who has discovered the convenience and advantages of milking machines.

He has joined that breed of Kenyan producers who have decided that technology is the way to go for better productivity on the farm.

They reduce risk of damage to teats, chances of mastitis, increase yields, save on time, reduce labour costs and are easy to operate, he says.

“The machine milks 1.5 to 2 litres a minute. It helps to maintain hygiene to the highest standards,” he adds, saying that all the milk from the udder is also removed.

‘The machine is also easily adjustable and gives a suckling feeling to the cow; it avoids pain in the udder and milk leakage,” he says. The farmer also says he has been able to reduce the number of workers who used to do the milking from 40 to only two who handle the machines. This has greatly reduced overhead costs.

“Anyone serious on getting good returns should invest in a milking machine. It is not only cost-effective but labour-friendly too.” The farmer adds that he is in the process of purchasing a cooler to build on the gains made since he bought the milking machine.

The apparatus works by opening the line canal through use of a partial vacuum, which allows milk to flow out of the teat cistern through a line to a receiving container.

The method also massages the teat, which prevents congestion of blood and lymph in the teat. There advantages associated with milking machines include saving on labour costs and re ducing dependency on skilled farm workers.

“Their use helps to increase production through ease of milking, better hygiene of the milk, higher stimulation of the animals and general wellbeing of the animal and the dairy farmer,” says Mr Douglas Keeru of Desley Holdings.

With the machines, milking a large number of grade cows that are high yielding, three to four times a day becomes like a walk in the park.

Hygiene standards of milk are also not compromised, while milk yield increases. This ensures an increase in the quality of milk and greatly reduces stress throughout the lactation period by creating good milking routines.

Mr Keeru points out that hand milking causes fatigue to the milking hand who is forced to take a re-energising break by releasing the cow and introducing a fresh one. “This action of incomplete milking is the first step in cows developing mastitis.

Other problems associated with it include milk contamination through wet or cracked hands and dust particles and animal hairs falling into the milk through the open pails,” he says.

However, there are some limitations.

Some of the older cows that are not used to the milking machine find it difficult to adapt to the new equipment, while stand by power supply is essential.

High initial investment and training of staff also acts as a barrier for those wishing to engage in the modern milking technology.

However, anyone can use this modern technology irrespective of the scale of the farmer according to Mr Keeru, “because affordability is relative to desire,” he says adding that the smallest is a one bucket machine suitable for one to 10 cows. Price is dependent on source and quality, he says.

Some cases of negligence may occur when cleaning procedures are not adhered to, leading to contamination and exposure of the animal to cases mastitis. A greater supply of water is required for cleaning the equipment.

Prompt service and availability of spares is essential.

However, with a correctly specified, installed, operated and maintained milking plant, you will be rewarded with a volume of milk according to your cows’ present ability and with a quality that meets the highest of standards.

The machine is fixed on one floor position but the milking positions can be as many as fits the herd on the farm.

It is set up in pipeline milking form, with the machine mounted on the floor and has high quality accessories such as clusters comprising of; adaptor de Laval, pulsator, milk tubes, air and vacuum tubes, pulse tubes, set of liners, shells, claws, vacuum taps, vacuum meter and plastic vacuum regulators. Pipeline milking machines

These machines have a continuous line through which milk is transported to a common receiver instead of the individual milking buckets.

They are suitable for a heavy work load in a large dairy farm where production is high. It can be connected from three to 16 points.

They remove the need for human labour during the milking process and require assistance only to receive, prepare and exit the cows.

These are advanced machines used where the herds are large with a heavy workload and or the highest standards of hygiene are being observed.

Set in the pipeline system, they are tailored for total milking convenience carrying with them simple to sophisticated automation.

The milk is transported through the line to the receiver and even to a milk cooling tank without any human intervention which is a manifestation of good hygiene.