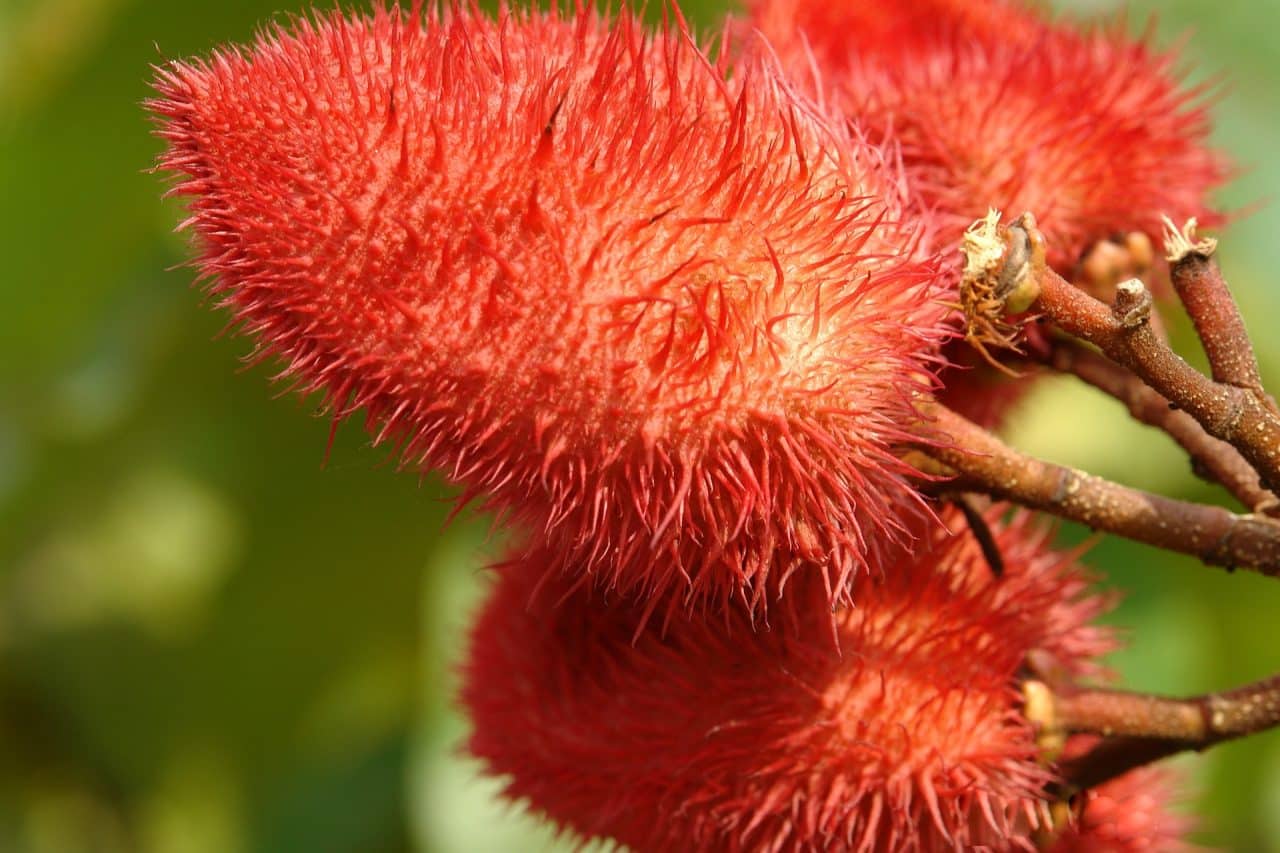 It is found on almost every farm in most parts of Kwale and Lamu counties, where it has been grown for several decades. Along the Kenyan Coastal Strip, in the Kikoneni area of Kwale County, farmers tell different stories about Bixa Orellana, locally known as mrangi or ‘lipstick tree’ because of its beautiful red fruit, a plant that is easily grown with other food crops.

Pantaleo Musyoka Nzomo, a resident of Kivulini Village has been cultivating Bixa since 1967, when he settled in Nguluku where he found the crop being grown and joined in.

“It was my first time to see the crop, but the stories by my neighbours encouraged me. I got the seedlings from them. At the time, a kilo of Bixa was going for 50 cents. It rose to Ksh100 at one point then dropped to Ksh45 and later settled at Ksh10.

“Nobody explained why the price plum- meted further. That was the time some farmers decided to abandon the crop but for me, it was the only cash crop I knew and I decided against cutting down the trees,” he recalled.

Nzomo likes the Bixa plant, even with the market and price uncertainties because it is not complicated to cultivate. Besides, he said, it is harvested twice a year and grows in the same weather and soil conditions as other crops.

“The seedlings are easily available because once the pods open and the seeds fall on the ground. They germinate and one can easily form a nursery. Once planted, it takes about a year to start producing.

“Some people tried to introduce a new variety, which I also have but the problem is that the new type is not resistant to diseases,” the farmer told Smart Farmer magazine.

A farmer can choose to leave them un- tended but weeding, pruning, and having a clean environment is important. Just like other crops, Bixa withers and dies when left with weeds.

“A well-tended crop will continue producing and because we inter-crop it with maize, beans, cassava and many others, keeping the area clean is not a problem,’’ Mr Musyoka explained.

Middlemen traversing farms looking for the crop have been their only market.

“We do not know what is going on and hope that something will be done. The good thing is that once you plant and tend the trees well, they do not need fertilisers and pesticides.

“I still believe that nothing compares to Bixa because it can uplift your economic status at a time when all the other crops are not doing well because of the vagaries of weather,” he added.

Ms Margaret Nzomo has also been cultivating Bixa since 2008 when she was introduced to the crop by a neighbour who gave her free seedlings.

“I grow because I know that someday, it will change our fortunes. This year has been tough because no one has come to buy because of Covid-19,” she moaned.

Experts say, Bixa is a viable crop and could help farmers in the coastal region earn a decent income. Mr Mwawira Masai, an agriculturalist, blames middlemen whom he accuses of taking over the marketing of the crop. This has left farmers without reliable alternative markets.

“Middlemen and brokers have taken over the marketing of the produce buying at whatever price they deem fit.

“We need to mobilise farmers, get resources, and set up a Bixa processing plant to add value to the produce. I do not subscribe to the idea of uprooting the plants. Let’s find ways to empower farmers to take charge of growing and selling processed products,” Mr Masai added.

Even though there were attempts in the 1990s to put up a Bixa processing factory in Lamu, the expert says it was frustrated by government bureaucracy and the project abandoned.

“The way to go is to allow farmers to produce, process and look for the markets because even now we are unsure about the inter- national market price. We still need Bixa. The demand is there because colouring, for which the crop is known, is still a booming enterprise locally and internationally,” the expert explained.

Matuga MP Kassim Tandaza, an accomplished Bixa farmer, told Smart Farmer the situation had been hopeless for the farmer but he was optimistic, after successfully pushing the Crops Bill 2019, which was passed in Parliament to look at the crop.

“The passing of the Bixa Bill means that the crop was removed from being an industrial crop to a scheduled crop just like coffee, maize, and tea. Now, the government can come in, do research, help farmers to get the best seeds, process, price, and market the crop.

“The prospects look good for the farmers. I had a discussion with Kenya Bixa, the only company buying and processing the produce to agree on a reasonable price and it agreed to buy at Ksh70 per kilo,” MP Tandaza said.

According to the legislator and local farmers, the price dropped to Ksh60 due to the collapse of the Bixa market in Europe because of the Covid-19 pandemic.

The Shimba Hills area has about 150 farmers cultivating the crop, with the entire constituency having about 300 farmers. The MP, who has 10 acres under Bixa, is a role model. He believes that Bixa farming is a viable enterprise that farmers need to be educated about.

“The biggest challenge is that of farmers who produce a few kilos, as they easily fall prey to brokers who buy at low prices and sell at better prices.”

When he moved the Crops Amendment Bill, 2019, the Matuga MP said there was great potential for the cultivation of Bixa.

The crop matures fully in four to five years and has an economic life of 20 years. Harvesting can be done after one year, though it is discouraged. The Achiote crop is the world’s second most important natural colourant. It is used to produce about 70 per cent of the world’s natural dyes.

“Bixa Orellana has been one of the four major cash crops in Kwale and one of seven major cash crops in Lamu. However, it is hard to get financial support because it is an industrial crop that cannot be consumed directly. Also, there are difficulties in securing a steady market and incentives,’’ the MP told Parliament.

Mr Mwaura Ndung’u, a farmer in Mpeketoni, Lamu, recalled when Bixa was a gem, they would fetch at least Ksh120 a kilo.

“Today, you are lucky if you get a broker buying a kilo at Ksh20. But even with the low prices, I will not uproot it be- cause I know some day the situation will change for the better,” Mr Ndung’u said.

Bixa Orellana belonging to the family Bixaceae, commonly known as Achiote, “lipstick tree”, mrangi at the Kenyan coast, and Annatto, is a shrub or tree about three to nine metres high, native from tropical areas of America, but widely cultivated in Africa and all other warm regions of the world.

Achiote, known at the coast as mrangi because of its bright red fruits, is a crop whose potential has been under-utilised.

The fruit is harvested for its seeds, which contain bixin, used for colour- ing cheese, fish, salad oil, margarine, and cosmetics like lipsticks.

The Achiote tree was introduced in the coastal region in the 1970s. The crop is disease and pest-free and drought-resistant. The crop also wards off wildlife such as elephants and is farmers’ buffer crop.