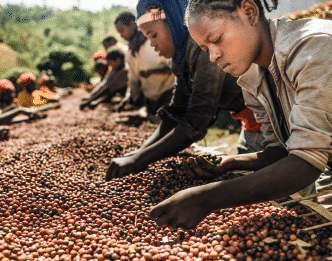 For many years, coffee farming was a profitable business. Many remember with nostalgia the good old days. Today, the situation has drastically changed.

While Kenyan coffee is still highly profitable and fetches handsome prices in the international market, the profits rarely trickle down to the small-scale farmer. Internationally, the coffee business commands up to Ksh1 trillion annually, but only less than one sixteenth of this figure reaches the farmer at the grassroots.

During the 124th session of the International Coffee Council held at the KICC in Nairobi, President Uhuru Kenyatta regretted that though Kenya produces some of the best coffee in the world, the premium prices that it fetches in the global market do not reach the country’s farmers.

“Paradoxically, the farmers, most of them small-scale producers, don’t get much. This efforts to revive ‘Black Gold’ renewed phenomenon, though not unique to Kenya, represents the single greatest challenge to the continued prominence of the coffee industry,” he said.

A flawed system has had farmers in a constant struggle to keep afloat, and they face challenges;

This has also adversely affected their livelihoods. However, the mismanagement of cooperatives is the greatest impediment. These entities have downgraede the king of cash crops, often referred to as the black gold.

Mr Charles Mwangi Kahio, 59, a coffee farmer in Kanguno, Murang’a County, is a farmer, who despite working hard, takes home almost nothing. His family has been involved in coffee farming for years, but lately, the prices have not been good.

“We started growing coffee in 1975 on a oneacre farm. We had hoped we could reap the benefits we often heard about and for a while, it was good. But every year that reality has kept fading into the background,” he says.

Small-scale farmers have for too long endured slave prices and poor management in the cooperative societies and at the national level by the Kenya Planters Cooperative Union (KPCU), he adds.

Coffee growers received the equivalent of six cents per cup in 1983, which rose to Ksh3 per kilo in 1990s, but was still not sufficient to put a smile on the farmer’s face.

Successive governments have tried to revive the once lucrative industry, but with little success. In 2003, under the National Rainbow Coalition  (Narc), there was a ray of hope for coffee farmers.

Changes in the industry

A series of changes in running of coffee societies, especially through the creation of the Ministry of Cooperatives then headed by Mr Peter Njeru Ndwiga (currently the Embu County senator), was initiated.

The changes led to improved pricing and farmers felt the effects since the ministry would cater for their needs directly, as opposed to when it was merged with the Trade and Industry docket.

“Farmers in Mathioya got a new buyer, who paid better prices, courtesy of the changes,” says Mr Mwangi. “In 2003, Central Coffee Millers based in Nyeri County, increased prices to between Ksh30 and Ksh40 per kilo.

“This led me back to the village to help my wife with coffee growing. Prices continued to improve and currently, the price of one kilo of coffee here in Kanguno Coffee farmers’ coope fetches between Ksh80 and Ksh82,” he adds.

However, to dampen this situation, the gradual rise in coffee prices has not been commensurate with the increase in the cost of production, including the cost of casual labour, which does not come cheap.

Non-competitive milling and marketing systems have also left farmers with no control over pricing of their cherries. Coffee processing factories have remained outdated and are crumbling due to poor management systems from the farm level to the markets and their inability to add value.

Because of this, members are not able to easily access credit and other forms of working capital, which ensures that they are not in a position to meet their next big challenge – pests and diseases.

Pesticides and herbicides’ are expensive and fake chemicals have flooded the market. Farmers who have to spray their crops every month except November and December, are straining under these costs.

Diseases such as coffee berry disease (CBD), leaf rust and Solai-Elgon die back, are developing resistance and attack the crops, despite use of chemicals.

The latter, which is new in Mount Kenya region where most of the country’s Arabica coffee is grown, is a bacterial blight disease that is infectious. These diseases, which occur during the wet and cold seasons, have diminished farmers’ hopes of realising a plentiful harvest.

Most farmers suspect the problem is with the chemicals they are buying from retailers.

“Some of these agrochemicals, especially those for managing the spread of CBD no longer work from what I have observed. Despite using them as advised, you lose almost the entire crop,” Mr Mwangi notes.

However, the government is looking into ways of solving the woes of the coffee farmer. Through the Coffee Subsector Implementation Committee created in 2016. It is to coordinate, provide strategic leadership and offer solutions in implementation of coffee reforms. The authorities have embarked on practices to help the coffee farmer.

“We are implementing a roadmap and an action plan that will prioritise on production, marketing and value addition to arrest declining production and boost morale among farmers. We are reaching out to all the value chain players to guarantee cordial accord on the implementation of the new reforms,” said committee chairman, Prof Joseph Kieyah, during the opening of the coffee conference.

The President announced a series of reforms designed to boost coffee production, reduce the cost of processing and milling, and transaction costs at the auction market, during the opening of the event. The conference, was aimed at enabling members of the International Coffee

Organisation (ICO), to have high level contact and discussions with policy makers, to address the problems that plague Kenya’s Coff ee industry. Some of the measures announced by the President during the event: Cherry revolving fund Following the launch of the Ksh3 billion cherry advance revolving fund, coff ee farmers in Kenya will from July this year be able to access advance payments for their cherries, aimed at resolving the problem of delays in coff ee payment cycles.

“Coff ee farmers across the country will access the cherry advance revolving fund at a modest interest rate of three per cent,” he said, adding that removing all the barriers that hinder farmers’ from reaping maximum profits from the crop in Kenya, is key in revamping its production.

The President also announced a rehabilitation programme of 500 pulping factories in 31 coff ee growing counties; the rehabilitation of planting materials and increased investment in research and extension services.

The government has embarked on an aggressive marketing strategy of Kenyan coff ee brands to increase the county’s market share. “We are aggressively marketing our brands globally to increase Kenya’s market share in Europe, US and in the emerging Asian markets,” he said, expressing optimism because the status of coffee in Kenya remains strong and its future outlook is positive.

Lack of proper regulations, the president added, had given room for middlemen to benefi t from coffee at the expense of farmers. Under a new regulatory framework, the coffee sector  will be liberalised to usher in a new era of direct marketing by co-operative societies and reverse the negative trends facing the coff ee sub-sector.

Cooperatives to be audited

The president also announced the requirement for all coff ee co-operatives to present audited annual reports to the agriculture cabinet secretary within six months of every calendar year.

“The inaugural audits under the forthcoming enhanced regulatory framework will cover the calendar year 2019, and shall be submitted by all co-operatives on or before December 31, 2019,” added Kenyatta.

Mr Ali Noor, PS Cooperatives, said that the audits would ensure that the cooperatives operate in a transparent manner and are held accountable for their actions.

“There are over 450 cooperatives in Kenya involved in the coff ee milling process. While some have gone ahead to do proper value addition, a majority continue to face challenges such as misappropriation of funds by their leaders, resulting in diminishing returns for the farmers.”

“It is for this reason, the Ministry of Trade, Industry and Cooperatives is engaging investigative agencies like DCI, EACC and DPP to undertake audit of the societies. This will collectively enhance coffee farming practices, as we look to put more money in the pockets of farmers without manipulation by middlemen in cooperatives,” he said

An MoU between the State department of Cooperatives and the relevant government investigative agencies; DCI, EACC and DPP to guide the modalities of overseeing aff airs in cooperatives and conduct an in-depth probe on the coffee saccos, will be signed.

“International consumers and buyers of Kenyan coffee have not failed to appreciate the good work done by the thousands of Kenyan farmers who till the land to provide some of the best coffee the world produces. Kenyan coffee is the best world over, it has the most delicious aroma to ever come from coff ee,” he said.

Mr Sette noted the need to fi nd lasting solutions on the global coff ee price volatility that, “if not checked, will lead to food insecurity and increased urban migration in coffee growing regions across the globe.”

“All eyes are now zoomed to the issue of price volatility in the coff ee sector. We must fi nd a lasting solution because, if the crisis continues, we are staring at stark consequences,” he concluded.