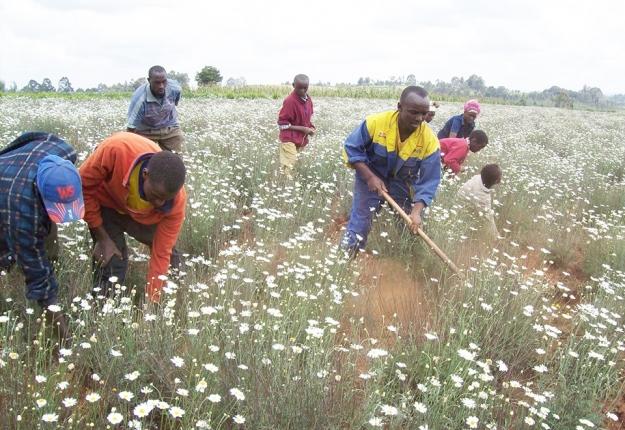 Elgeyo-Marakwet Governor Alex Tolgos 22nd February, struck a deal with Dan Church Aid (DCA) and the National Council of Churches of Kenya (NCCK) to revive pyrethrum growing in the county with guaranteed payments.

The county will be part of four, whose farmers will benefit from a Ksh250,000 per farmer support from the Norwegian Agency for Development (Norad), over four years, to grow the crop.

Pyrethrum growing collapsed in the 1990s owing to non-payment for produce delivered to the Pyrethrum Board of Kenya.
However, under the new partnership and with the involvement of a US-based company, Kentegra Limited, payments will be guaranteed.

Kentegra will offer a ready market for farmers and pay them promptly through their M-Pesa.

The new partnership, dubbed the,  ‘Sustainable Pyrethrum Market System Development Project Kenya’, will begin in April. Farmers are expected to enrol and will be offered subsidised seedlings and technical support to grow the crop.

He was speaking during a consultative meeting to launch the programme.

“Kentegra Company has set up shop in Nairobi and they (Kentegra) will support farmer representatives and county technical officers to visit its factory located in the Athi River Export Processing Zone on a fact finding mission soon,” said Mr Kibuku.

Governor Tolgos said: “The new partnership will create much needed wealth as well as jobs. Farmers, particularly in the highland areas, should embrace the programme.”

He recalled that in the 1990s, the pyrethrum sub-sector employed many people to harvest the crop. Many more in Elgeyo Marakwet were also educated with the proceeds from sale of pyrethrum produce.

“That is set to resume now because we and our partners are keen to ensure that we do not repeat the mistakes that led to the collapse of pyrethrum growing and subsequent loss of trust in the crop,” said the governor.

The county would enter into a Memorandum of Understanding with all players in the programme, including Kentegra Company to shield farmers from losses.

Mr Kibuku disclosed that the implementing agency, DCA, would also roll out a micro insurance programme to safeguard the farmers’ investments at the grassroots.

“This was after they discovered that many insurance companies have left out rural populations, yet they are vulnerable to vagaries such as floods,” he said.

The head of the delegation and NCCK Regional Manager Grace Rugut said: “The church umbrella body will continue funding various developmental interventions under its Ugatuzi Programme. Ugatuzi I programme, had offered support to North Rift counties in economic empowerment and peace building at the grassroots worth over Ksh20 million and a further Ksh1million going towards Covid-19 relief assistance.

“Ugatuzi I came to an end and we will now be launching Ugatuzi II to support grassroots livelihoods empowerment targeting farmers in semi arid areas of these counties,” she said.

She thanked DCA and other organisations, which support NCCK’s initiatives in the region, saying the interventions had improved the living standards of locals and reduced insecurity.

“The church and the government are inseparable and we should commit to complement one another in the service of God and humanity,” she added.

Governor lauded the NCCK and its partners for supporting the development agenda in the counties. To every programme initiated by the NCCK, he added, the counties would add matching resources to make them more impactful.

The meetingwas held at the governor’s boardroom and attended by Deputy Governor Wisley Rotich, CECs, Chief Officers, directors and officials from the NCCK and DCA and local community representatives.