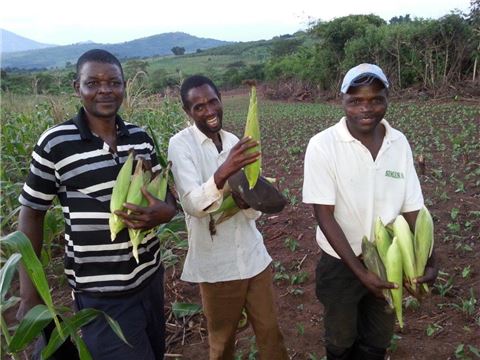 A soil health consortium has reached more than 1.3 million smallholders in sub-Saharan Africa, helping them to grow more and better crops. This has increased their livelihoods and boosted local, regional and national food security.

The Africa Soil Health Consortium (ASHC) led by CABI and supported by the Bill and Melinda Gates Foundation is working with a range of partners in Ghana, Nigeria, Tanzania and Uganda.

Although ASHC aimed to reach 450,000 farmers, it has since its launch in 2013, far exceeded its goal by tripling the number of those benefiting from its advice.

The smallholders are now more aware of ISFM practices for key crops such as maize, rice and soybean. Evidence from outcome studies showed that at least 20 per cent of them adopted a range of new soil health practices.

Besides radio and text messages, ASHC and its partners also use novel ways to reach farmers. They include comic books, drama productions and music videos with down-to-earth messages about soil health. Families are encouraged to share information about soil fertility and good agronomic practices. This strategy proved especially useful for reaching younger people.

“Poor soil fertility is one of the biggest hurdles preventing small-scale farmers in sub-Saharan Africa from improving productivity and, therefore, increasing their incomes,” project manager James Watitu said. He is the coordinator-development, communication and extension.

“A lack of access to reliable and timely information about ISFM means smallholders cannot easily learn about and put into practice the tried and tested practices even for the most commonly grown crops such as common beans and maize,” he added.

“CABI helped to bridge the gap in farmers’ knowledge by cultivating partnerships with over 70 different agencies to plan and implement more than 18 scale-up campaigns, which has seen a marked change in ISFM practices and, accordingly, increases in yield,” Mr Waititu said.

The partners helped create over 600 ISFM materials now available on the ASHC website for anyone to use. ASHC information materials and lessons have proved very useful and have been shared by many third-party agencies beyond the project’s original scope of four countries.

The ASHC family of projects includes many initiatives such as Gender and the Legume Alliance (GALA), and Upscaling Technologies in Agriculture through Knowledge Extension (UPTAKE) and Scaling Up Improved Legume Technologies (SILT).