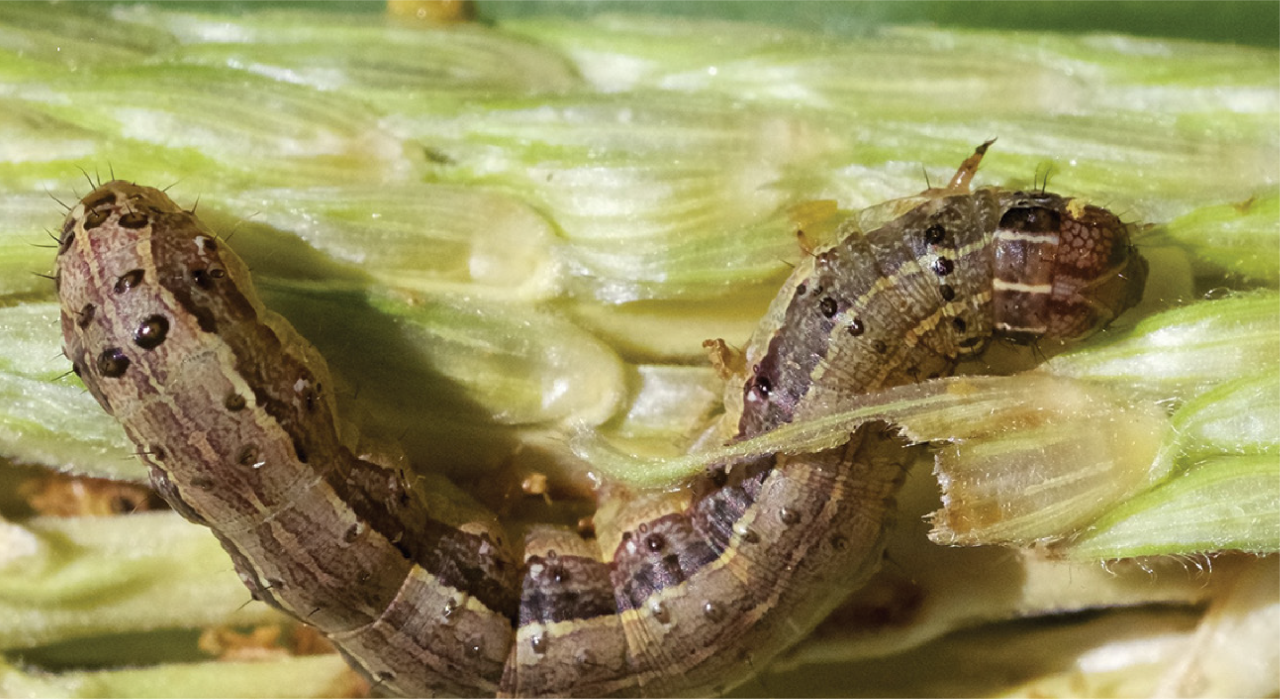 Fall Armyworms (spodopterafrugiperda) are migratory pests that occur in large numbers and its caterpillars cause severe damage to more than 80 plant species, especially cereal crops such as: maize and rice.
June 3, 2022
Views: 1008

Recently, FAW has spread to Southern and Eastern Africa and has brought havoc to maize farmers. In Kenya, the fall armyworm (Spodopterafrugiperda) is becoming a nightmare to cereal farmers especially in Tranzoia, Vihiga, Kakamega, Kisii, UasinGishu, Nandi, Kericho, Baringo and Kilifi.

“FAW damages corn plants in nearly all stages of development but will concentrate on later plantings that have not yet silked. Off- season planting, late planted fields and later maturing hybrids are more likely to become infested. To win the war on FAW, insecticides of different chemical classes need to be alternated because they mutate very fast. Good efficacy has been recorded to farmers who spray insecticides in late evenings as opposed to during daytime. This is attributed to the fact that FAW are nocturnal,” states Timothy Munywoki, Amiran’s cereal agronomist.

FAW moths have a capacity of flying long distances and lay a large number of eggs that enables the pest to quickly establish in a new area. Movement of infested plant materials; (green or dry stover for animals, green maize cobs) can aid in carrying the different FAW stages within the same farm or in the locality.

To curb the pest, early detection and proper timing of an insecticide application are critical. Farmers need to be educated on proper IPM measures to curb the pest. To contain FAW, one has to target the four stages of the pest which include: Eggs, Larvae, Pupa and Adult.

The female lays tiny eggs in masses of 150-200 on host plants which are covered with protein sheaths to protect them from attack by natural enemies and pesticides. In her lifetime, a female lays 1,500-2,000 eggs. Eggs hatch in 3 to7 days.

According to Mr Munywoki, ‘Prove’ (an insecticide) has an ovicidal effect and causes high mortality from the eggs to first instar. Oil based insecticides may be used in this stage like SAF-T-side

The larval stage is the most destructive phase, feeding on soft plant tissues. There are usually six instars in fall armyworm. “In Amiran Kenya we have a basket of solutions to curb FAW larvae. First we recommend Pyrinex and Pyrinex Quick, especially on initial stages of maize crop, during Germination and population establishment. Pyrinex has fumigant action and will not only work on FAW but also other stubborn soil pests like termites, chaffer grubs and cutworms. Pyrinex Quick has a unique combination of micro-encapsulated formulation of chlorpyrifos and a pyrethroid. The combination of the two active ingredients brings fumigant action and quick knock down on army worms.

Secondly, we recommend Prove, a superior product which offers unmatched protection against FAW. Prove is a nonsystemic insecticide with the ability to penetrate leaf tissues by translaminar movement. Prove once applied on army worms, feeding and egg laying stops and death occurs after a few days. Prove has a long residual effect and no cross-resistance has been recorded due to its unique mode of action.

Thirdly we recommend ‘Grizly’. Grizly is a combination of benzoylureas(IGR) and neonicoti- noids with contact, translaminar and systemic and contact activity. Grizly is readily taken up by the plant and further distributed acropetally through the entire crop. Grizly has both Ingestion and Contact activ- ity on larvae of armyworms and is a growth regulator thus prevents the FAW from proceeding to the next instar.

Finally, we recommend ‘Radiant’. Radiant is an excellent product for resistance management. In addition, Radiant has unique active ingredients and has relatively low usage rates. All the said products should be alternated to achieve full control of FAW.

Normally, pupation takes place in the soil at a depth 2 to 7 cm. The pupa is reddish brown in color, and measures 14 to 18 mm in length and about 4.5 mm in width. The larva constructs a loose cocoon, oval in shape and 20 to 30 mm in length by tying together particles of soil with silk. If the soil is too hard, larvae may web together leaf debris and other material to form a cocoon on the soil surface. Duration of the pupal stage is between 7 – 14 days. “Proper control of this stage revolves around damaging the pupa which is burrowed either in the soil or leaf debris. For instance, deep ploughing exposes the pupae to predators and solar heat,” says the agronomist.

The moths have a wingspan of 32 to 40 mm. In the male moth, the forewing generally is shaded gray and brown with triangular white spots at the tip and near the center of the wing. The forewings of females are less distinctly marked, ranging from a uniform grayish brown to a fine mottling of gray and brown. The hind wing is iridescent silver-white with a narrow dark border in both sexes. Adults are nocturnal and are most active during warm humid nights and mates in the evening.

After a pre-oviposition period of three to four days, the female normally deposits most of her eggs during the first four to five days of life. The adult moth is capable of flying 30kms in one night drifting through air current. On average, duration of adult life is estimated to about 11 days to 14 days. “To control posts a great challenge on the use of chemicals. Pheromone traps will work effectively in this stage. However, proper timing of application of the insecticide can control the adult moth. Insecticides like Prove, Pyrinex Quick and Pyrinex will have a proper control if applied at the right timing.”