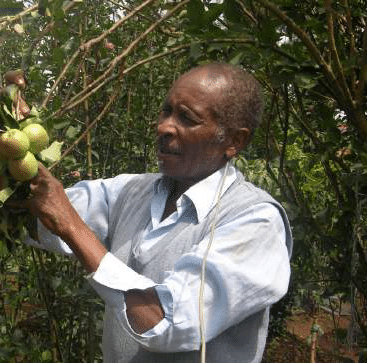 Mr John Munya pulls a metal hanging on a wire on his quarter-acre apple farm in Kimumu, Uasin Gishu County, and it bursts into a cacophony of sounds that send birds dashing for safety. He repeats this every time he spots birds hovering over the farm. The 74-year-old farmer has devised a way of scaring away the birds that eat his apples, using the metals hanging on wires strewn all over the farm.

2-3 YEARS Period after which formative pruning should be done to establish tree structure. The young un-branched nursery seedling should be nipped at about one metre from the ground to stimulate side branching below the head

“Even if you invite me for a cup of tea, I will not come. My future is here on the farm,” he says, as he strolls round, adding that every space on his farm is meant for apples and nothing else! His entire land is filled with apple trees at various stages of growth, save for the area where his magnificent house stands.

This has earned him the name, ‘Smart urban farmer’. Mr Munya has 315 apple trees, which he started growing as a hobby, but which has blossomed into a thriving enterprise. He now banks on apples, and “no longer wants to see any other tree in his compound,” he says, as get down to the interview.

He has since found a ready market in City Park in Nairobi and a buyer who exports the apples to South Sudan. Currently, he has 200 mature trees. In a good month, the farmer rakes in between Ksh150,000 and Ksh180,000.

“I harvest two to three cartons daily. Each carton has about 100 apples. I sell each at Ksh20 to Ksh30, depending on the size.”

The farmer also sells seedlings at between Ksh300 and Ksh350. His is a story of opportunity taken, which has morphed into an apple empire.

How did it all begin?

In 2007, Mr Munya, accompanied a friend ta ruracio (bridal introduction) in Nyeri County. There, he met an old man who was growing apple fruits. At the time, his only interest was to provide his family with fruits. “Out of curiosity,

After two years, he had started harvesting. The harvest was so good that he had a surplus and decided to sell some to his neighbours and passersby.

“I was able to sell about 600 pieces of the fruit at Ksh20 to Ksh30,” recalls the father of five. Between 2013 and 2015, he was harvesting the fruits from 50 apple trees, selling to fruit vendors in Eldoret Town and Kimumu residents at Ksh10-20 apiece.

Stung by the idea of going full-blown into apple farming, he went back for another 30 trees in 2010, which he bought at Ksh300, spending about Ksh9,000.

He taught himself how to graft and soon began filling his farm with seedlings. “I have stopped growing other crops, and building rental houses on this space is out of the question. With the money I get from my apples, I can buy anything I want.”

He has seven varieties of apples, but the green and red ones are fast-moving in the market. A mature tree can produce up to 3,000 apples a year, or 30kg to 40kg. Today, he gets seedlings by grafting them from his mature trees.

“Apples require soils that are rich in potassium to increase the fruit’s sweetness,” he explains. He digs two-foot deep by two-foot wide holes. He mixes about 10kg of manure with soil for each seedling. During the dry season, he irrigates them. “I pump the water from a borehole to my 1,500-litre tank, at a monthly cost of Ksh500,” he says.

Mature apples do not need a lot of water but when they are young he waters them for the first six months.

Before flowering, he removes all the leaves since the flowers sprout from the buds, each producing four to six fruits. This improves the quality and quantity of yields. Once the trees start fruiting, he supports them with poles so that they don’t fall under the weight of the fruits.

“I work on the farm alone and only employ casuals during harvesting. To get the desired fruit size and quality, I also thin the trees,” he explains.

Aphids, thrips and spiders can sometimes attack the fruit. He controls the aphids by spraying the trees when they are about to flower.

“Spraying costs about Ksh200 per month. It is advisable to use disease-free seedlings and observe high standards of hygiene on the farm,” he advises. Birds are a challenge, but he has devised a method to control them.

“Just like other predators, the birds sometimes manoeuvre their way to eat the apples but again, they cannot finish the fruits,” he notes.

A proper management schedule is key in apple farming. “Apples require a lot of attention; and because during harvesting, the apple tree produces fruits continuously, I can harvest every day,” he says. Mr Munya is also planting strawberries and grapes in small quantities. His ability to detect infected trees or fruits by just looking at them and  ensures that he deals with the diseases.

With proceeds from his venture, he is constructing a perimeter wall on which he plans to mount a chicken link net to ward off birds.

“Let youth not say there are no jobs. There are more jobs on the farm than people,” he declares. The farmer grows six varieties of the apple, which can be green, red, pink lady, yellow, green with stripes and one that he grafted.

What you did not know about apple farming

Apples are rich in Vitamin B-complex and beta- carotene, as well as minerals such as potassium, phosphorus, and calcium. In 2014, areas under apple cultivation increased by 33 percent while yields and value increased by 93 percent and 75 per cent, respectively, compared to previous years, according to the Horticultural Crops Directorate.

How to grow apples

Top-dress six months after planting with 150g of CAN fertiliser to boost growth; And avoid shading the young tree. However, low growing crops such as legumes can be planted in between the apple plants. It takes one year and eight months to two years for the tree to reach maturity. At two years, the apple tree starts flowering and fruiting continues throughout its life cycle.

Formative pruning should be done in the first two to three years to establish the tree structure. The young un-branched nursery seedling should be nipped at about one metre from the ground to stimulate side branching below the head;

Pinch flowers that develop during this period. This will ensure that you get a stronger tree, which will give you better yields for a longer period; From the emerging branches, a farmer should select three to four strong branches distributed evenly along and around the central leader and at least 15cm apart along the trunk; The selected branches are tipped off (Removing the top three or four buds to encourage them to produce more side branches thus more tip-bearing shoots) at the end of the growing season or during the dormant period to stimulate secondary branching.

Apples go into dormancy or four to six weeks, immediately the harvesting season ends. During this stage, one should remove all the leaves to break the lateral bud dormancy to increase blossoming in the new season. Some farmers apply a growth regulator to aid in breaking dormancy and ensure uniform flowering.

Ensure about two to three evenly spaced fruit per spur to avoid malformation due to crowding of heavy fruit set. Thinning also ensures the production of large fruits of uniform colour.

This is a very important stage to avoid wastage. Handle the fruit carefully to avoid brusing them. Retain a small stalk attached to the fruit for ease in handling.

It is a fungal disease that attacks leaves and fruits. The symptoms include blackening and necrosis of the leaf margin.

It attacks the leaves and stem. Copper- based fungicides can also be used to control it.

This disease affects the new shoots, leaves, and buds of the tree and can be controlled through the application of sulphur- based fungicide at 10-day intervals.

This is a small fly with silvery wings that attacks the fruits as they approach maturity, puncturing, and laying eggs in them, leading to rotting. It is controlled through field sanitation by burying the affected fruits in a hole at least one metre deep or putting the fruits in a drum of water to suffocate them. You can also use pheromone traps and attractants like molasses or sugar mixed with an insecticide, which trap and kill the fly.