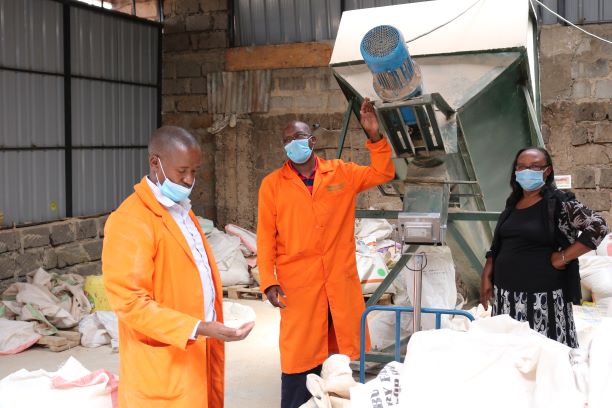 When egg prices dropped in November 2018 due to imports flooding the Kenyan market, local farmers were hit hard. They had nowhere to take their eggs, and some had to sell them at throwaway prices. Kiambu, just like other places across the country, was badly affected.

To counter this adversity, the farmers got together and formed the Kiambu Farmers Poultry Group. This would be the beginning of a remarkable journey along which the farmers have won many battles. The Organic Farmer (TOF) team visited the group to find out how they have been faring, barely a year since registering the co-operative.

“It was necessity that pulled us together. We sent messages informing farmers of a meeting, and the turnout was overwhelming. In fact, farmers from other counties heard of the meeting and they came in numbers,” said Mr Zachary Munyambu, the group’s coordinator.

This was an indication that many other farmers were facing similar problems. Since the group could not absorb all the farmers, they agreed that each county would form its own group.

Rules and regulations were set to ensure order and decorum. A mandatory Ksh500 registration fee and a share capital of Ksh2,000 were agreed and 700 members registered.

The group first tackled the most pressing of these problems, which was finding a market. After investigations into poor pricing and lack of markets for eggs, it became apparent they were dealing with a much bigger problem. Unscrupulous traders would prompt the importation of eggs, which retailed locally at very low prices.

The group had to devise ways to fight this. They considered public demonstrations and picketing to get the attention of policy makers but, following advice from the authorities, sought audience from the area MP Patrick Wainaina. With his assistance, the group was able to secure an  appointment with the Cabinet Secretary (CS), Ministry of Agriculture at the time.

“Just when we were crying foul over flooded markets, the notion that there was inadequate local supply of chickens and their products was created, with the CS being urged to authorise imports,” recalled Mr Munyambu.

This timely grievance halted the process and instead of authorising imports, the Agriculture CS stopped importation of all chicken products. This was a great relief for many poultry farmers. This would lead to eggs prices stabilising due to the availability of markets.

The group later registered itself as a cooperative society, increasing its influence in solving challenges of obtaining quality chicken feeds and controlling poultry diseases.

“We wanted to name ourselves as Kiambu County Poultry Farmers Cooperative Society, because our membership cut-across the entire Kiambu County. Adopting the name ‘County’ was not easy, but we were determined, and eventually, we became a certified county cooperative society.”

With the newly acquired status, and markets available for their products, the newly registered cooperative society began providing chicken feeds to members at lower prices.

“We did not have the equipment to make our own feeds and started by contracting another miller to make the feeds on our behalf.”

In the first month, the cooperative sold 3,000 bags of chicken feeds.

“We decided to start our own factory to make the chicken feeds,” he said.

They identified a supplier of the equipment, packaging bags and raw materials.

The group took a loan of Ksh2.5 million, which was their starting capital.

The group currently produces 3,850 bags of feeds per month, which it sells to both its members and non-members.

The cooperative society has hired a production expert, who does the feed formulations and manages the processing. While a bag of feeds costs about Ksh2,700 when buying from a regular supplier, the cooperative supplies each at Ksh2,500, and delivers it to the farmers free of charge.

They import raw materials such as soya, cotton, sunflower, and omena from Uganda and Tanzania, except maize, which is locally available.

“To boost the nutritional quality of our feeds, we add crushed bones from the Kenya Meat Commission, which increases the calcium and animal fat content,” said Mr John Mwaniki, the feed production manager.

The factory has 16 employees. The group has grown in leaps and bounds and has assets worth Ksh4.5 million, including the equipment, warehouse, and the produced material.

It has expanded and is also making dairy feeds.

“We observed that every time we delivered a bag of chicken feed, the farmer would request for a bag of dairy meal so we started processing the dairy meal, too,” says Munyambu.

Things were not always easy and the thriving cooperative has faced many challenges.

“Often, importing raw materials from neighboring countries is expensive as a slight change in price per unit raises the cost of the bulk material. This reflects on the price of feeds, which can turn away farmers,” explains Mr Mwaniki.

Another challenge is lack of coordination between the counties.

“Some counties can produce these raw materials in plenty so that feed companies do not have to import. This would be a source of income for farmers in these counties but this is yet to be initiated by the county government,” he says.

He also points out that if the sector is effectively coordinated, and producers linked directly to consumers, cartels would be eliminated.

Farmers also lack knowledge and sufficient training in crop production for animal feed formulation, yet it would be a great opportunity as the feeds are constantly in high demand, Mr Mwaniki explains.

“Also, when farmers are struggling with disease outbreaks, there is no one to provide information on how to deal with them,” he says, “Research from the relevant institutions can be beneficial to the farmer by offering solutions to such challenges”.

The group plans to create a centralised market for eggs, where farmers and buyers can meet for convenient business. It is also looking to lease a go-down for members to store their products.

They currently hire transport to deliver feeds to buyers, and plan to buy their own trucks soon.

“We also plan to establish our own slaughterhouse for the retired layers and broilers, where we will package chicken for sale,” he adds.

On value addition, the group seeks to partner with bakeries and provide ready-to-use, processed eggs, for pastry making.

There are many things other farmers can learn from Kiambu County Poultry Farmers’ Cooperative.

The strides they have made so far and their potential for growth can only be achieved through shared goals and unity among group members, coupled with visionary leadership.

If you are a farmer struggling with challenges, there is a possibility that other farmers in your area face similar problems. Groups have greater potential in providing solutions.

It is time you took your group aspirations higher and created opportunities for growth, and generating income.

Ms Ann Wanjiku, the group’s chairperson, has been rearing chickens for 15 years. She currently has 1,500 chickens and eight cattle. She advises that farmers should not be discouraged by challenges in chicken rearing.

“Chickens are a dependable source of income, and groups are advantageous. Do not keep poultry on your own. Form groups to find markets and seek solutions. Let members have a platform where they can tell others what they are selling or buying, ensuring that markets are always available.”