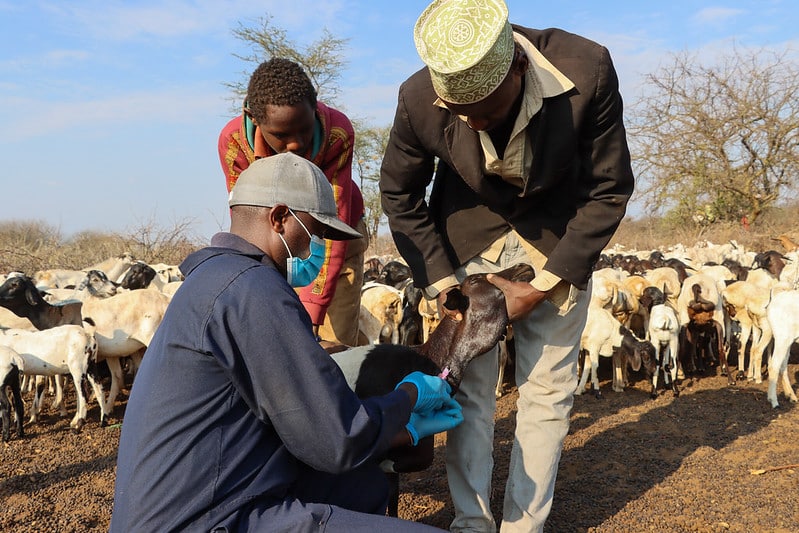 Extracting sheep blood sample: Wilson Mbaya, takes a blood sample from a sheep in Isiolo County, Kenya. This is part of a cross-sectional study to determine the prevalence of brucellosis, Q fever and Rift Valley fever in the county (photo credit: ILRI/Geoffrey Njenga).
June 5, 2022
Views: 986

By Mwangi Mumero
Livestock herders in Garissa and Tana River counties need to be extra vigilant in their handling of milk and meat products to avoid a high infectious disease known as Q fever (query fever), researchers from the International Livestock Research Institute (ILRI) now say.
Q fever is a zoonotic disease that is transmitted from animals to humans through contaminated milk and meat products, according to the researchers.
The human health effects of Q fever range from fever, chronic fatigue, difficulty in breathing and muscle aches and pain. In animals, it may cause high abortion rates, stillbirths, infertility, weak calves, kids or lambs, and inflammation of the uterus in pregnant animals, especially cattle.
ILRI researchers collected serum samples from 2,727 animals that included cattle, sheep and goats in both counties and tested for antibodies against Coxiella burnetii, the bacterium that causes query fever
(Q fever) in humans and livestock.
Their study findings published in the PLoS Neglected Tropical Diseases journal established that all the three livestock animals have the bacteria-with more goats and sheep tested positive to C. burnetii than
cattle.
It was established that exposure to the highly infectious C. burnetii in livestock was due to frequent contact between infected and vulnerable animals in farms or during grazing.
Infected animals shed large quantities of C. burnetii in milk, faeces, urine, and vaginal discharge for months, which could enhance the transmission levels in households through environmental contamination as the pathogen remains viable in the environment for a long time.
In humans, the study also found a large percentage of individuals who were positive for C. burnetii but did not have a single animal in their herd that tested positive for this bacterium.
There were suggestions that some persons may be exposed to the bacterium through different routes including environmental contamination or airborne dispersal.
More men tested positive for C. burnetii than women likely due to their primary responsibilities in herding, slaughtering, and assisting animals during birthing.

According to the report, the disease is commonly misdiagnosed because its clinical presentation is similar to that of other fever-causing illnesses such as brucellosis, leptospirosis, staphylococcal infections, dengue fever, enteric fever, rickettsial infections and malaria.

These findings will help the county governments of Garissa and Tana River to create more public awareness of Q fever to reduce its transmission and burden.
The detection of antibodies against C. burnetii in livestock and humans shows the need to establish One Health active surveillance in the two counties to identify the potential routes of transmission of this pathogen in humans.
The disease is endemic in livestock and human populations in Africa, especially in poor, rural areas where goats, sheep and cattle interact freely with humans.