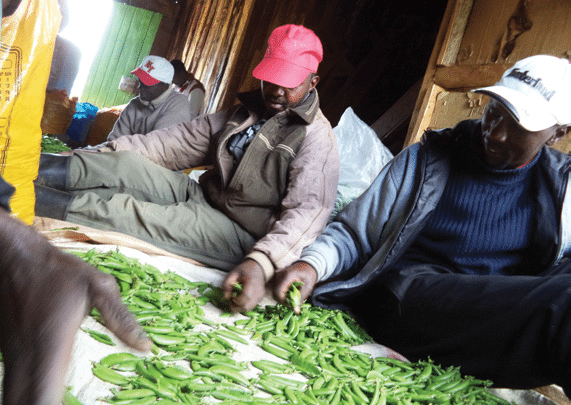 They resemble the more common garden peas popularly known as minji, but while sugar snap peas have an edible pod and is less fibrous, the former have pods that are firm and rounded.

Snap peas (Pisum sativum var. macrocarpon) are a cross between the snow and garden peas and have their whole pods eaten. They have a crunchy texture and sweet flavour.

Snow peas are flat with very small peas inside. The whole pod is edible and has a mild flavour. In Nyandarua County, snap peas are the new attraction, with farmers shifting from their traditional potato crop, to grow this lucrative climbing plant from the legume family.

From an acre, farmers are earning up to Ksh750,000, depending on the season, within only four months of planting. While the Irish potato is synonymous with Nyandarua and has for years been the mainstay, exploitation by middlemen who not only dictate the price of the produce, but also the mode of packaging for the market, have ruined the chances of an otherwise also lucrative tuber.

Mr Reuben Mwangi from Giita Village in Kipipiri Sub-County has been growing potatoes for 10 years, having inherited this from his parents. He is among the farmers who having endured exploitation for too long, has, like many others, taken up this new crop.

“Growing sugar snap peas has proved to be a rewarding venture in two years. We mainly grow it for the export market” says Mr Mwangi.

During the last season, he earned Ksh350,000 from half-an-acre of his land up from the paltry Ksh40,000 he used to get from potatoes.

Sugar snap peas are not only favourable to the pocket, but are also high in nutritional value. Apart from being low in calories, they are a good source of iron, which helps to boost production of energy, activates enzymes and nourishes red blood cells.

They are also a good source vitamin C, and A. The peas are crisp, sweet, and crunchy in the uncooked state; or they can be sautéed, stir-fried, or steamed.

“When we introduced snap peas, it was out of concern over increasing poverty levels. Potato farming was not doing the farmers any good. Lack of implementation of the Potato Marketing Bill was a big blow to farmers,” he says.

Mr Mwangi says the high season is from March to June, and November to January. Thanks to sugar snap peas farming, Mr Mwangi has built a permanent house worth Ksh1.5 million, invested in dairy farming and now plans to buy a two-acre piece of land by mid next year.

He has three dairy cows each producing an average of 15kg of milk in a day. “My three children are in boarding schools. I can now comfortably educate them,” says the 36-yearold farmer.

With proper husbandry, the agronomist says, an acre can produce up to three tonnes of the pods, with the first harvest coming 60 days after sowing and continuing for about two months.

Picking is done twice a week.

The pods are harvested when they are bright green, well-filled with the pea, but with some space between the peas. Pods contain three to eight peas each. In the high season, a kilo of the pods sells at Ksh250, dropping to Sh60 during the low season.

According to Mr Muchai, an acre requires about 10kg of seeds, which must be planted in loosened soils. A kilo of the seeds retails at between Ksh500 and Ksh1,000.

Among the varieties available are Cascadia, Oregon Sugar Pod II, Sweet Horizon and Snow Wind, which are supplied by Amiran or Syngenta

Should be well-drained, with good aeration and rich in organic matter. Should be well prepared. The soil pH should range at 6 to 7.7

Application of well-prepared organic manure about 5-7 tonnes is recommended.

NB: The crop can be labour- intensive Growing plants require poles (trellising) to support the vines and keep them off the ground

A well-distributed annual rainfall ranging from 1,500 to 2,100mm per annum is ideal.

NB: Besides reducing the risks of disease and pest attacks, it is easier to harvest in a weed-free farm.

Fusarium wilt is the most common disease of sugar snap peas. Plants yellow and wilting leaves