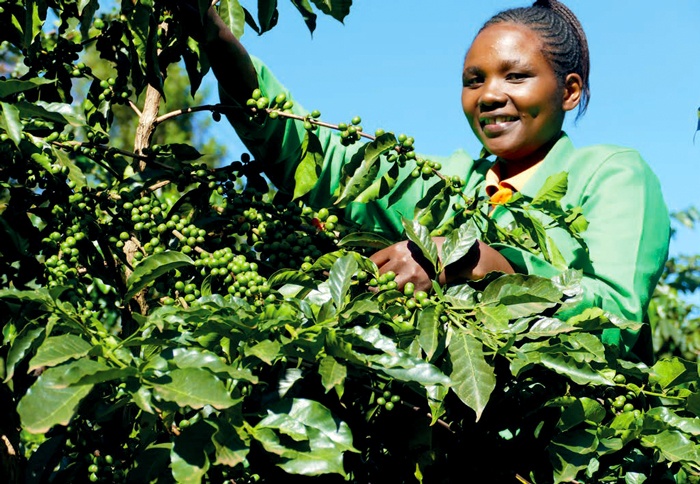 Youthful Nyawira Njiraini, keenly inspects the coffee cherries on her quarter-acre plot in Kiratina Village, Kirinyaga County, and breaks into a smile. The information and technology graduate of Kenyatta University believes she has found her real calling.

She has gradually increased her mastery of coffee growing and is seeing the fruits. Last season alone, she harvested 6,000kg, about 20 kilogrammes per stem from 300 bushes and sold each kilo at Ksh78.

“It has not always been this rosy,” Nyawira volunteers,

“I had to hit rock-bottom to see the opportunity that lay right before my eyes,” she recalls. She had never expected that after graduating from university in 2012, she would face the most difficult time in her life. She started a business and lost Ksh200,000 to conmen and closed up shop. “I returned home in mid-2013 a dejected woman. It was the lowest moment of my life,” Nyawira recalls.

“I had a rough time in Nairobi and had to relocate back to the village to survive,” she says. However, something later caught her interest – her mother’s coffee farm. Her mother seemed to be getting by very well on coffee proceeds and Nyawira believed she could do better with improved practices.

“I started doing research on good coffee management practices, disease prevention, and climate-resistant varieties to help my mother” Her efforts were rewarded a year later, when her mother won the Ministry of Agriculture’s ‘Women in agriculture’ award sponsored by Elgon Kenya an agri-input supplies company in Kenya. Highly motivated, Nyawira decided to follow in her mother’s footsteps. In 2016, her mother gifted her with 300 stems and she has never looked back since.

“I care a lot about my coffee trees. I have mastered agronomical practices related to good coffee production and it is gradually paying off . My production improved from a kilo per stem in 2017 to 10kg per stem in 2018,” she notes, adding that the cost of production of the Batian variety is lower.

Her projection for this year is encouraging, “With the superb management, I am expecting 9,000kg or about 30kg per tree.” To ensure a steady flow of income, the mother of one has diversified into thorn melon and moringa farming. This season, she earned Ksh80,000 from the melon, which she sold at Ksh5 to Ksh10 per piece. In Kenya, volatile prices, climate change effects and land use changes have hampered coffee production.

According to the Coffee Research Foundation, production in central Kenya, one of the major coffee producers, declined drastically last season.

Mr Kelvin Muhia, a coffee business development adviser at Fairtrade Africa, an organisation that facilitates access to markets for farmers and provides certification support for coffee producers, notes that farmers need to grow the crop under good agricultural practices and ethical standards to attract good prices. “Fairtrade coffee farmers are guaranteed a minimum price, which covers their production costs and personal needs, and caters for any unforeseen issues,” he explains. Ms Nyawira and many other farmers selling their crop to Fairtrade certified Mutira Farmers Cooperative Society, are reaping the benefits.

In addition to superior prices, they also receive premium payments above the prevailing minimum or market price.

“I have been trained on good coffee farming practices, including increasing production by reducing the cost of production. And the price I get from direct sale of the cherries motivates me to continue growing coffee,” says Ms Nyawira. Mr Boniface Muchiri, the chief executive officer at the co-operative society, notes that certification has helped producers to handle spraying, drying, sorting, and traceability challenges in the value chain, increasing the premium grades “Before certification in 2011, this facility hardly produced 45 per cent of the three premium grades. Today we are at 80 per cent premium,” says Muchiri.

The society has more than 5,000 farmers in the larger Kirinyaga East, Central and West regions. Farmers and cooperative societies are guided by standards set by Fairtrade Africa. The society has also adopted new eco-pulping technology and metallic drying beds for coffee beans. Only five per cent of Kenya’s coffee is consumed locally, while 95 per cent is exported, a worrying situation, which has led many stakeholders to renew efforts to increase domestic consumption. The chairman of the coffee sub-sector reforms implementation committee, Prof Joseph Keiya noted.

“This dependence on exports leaves the country vulnerable to price volatility. Increased local consumption can cushion us and aid in planning.” The cooperative society has taken the cue and is already adding value to its coffee for sale within the county and its environs.

How she plants her coffee Ms Nyawira explains that good coffee husbandry matters, right from tending, to seedlings, to choosing the best variety for a certain agronomical zone, and managing the crop to produce incredibly well. She says:

• I make sure I choose the right variety that suits my area;

• Dig holes measuring 3ft by 2 ft and observing spacing of 9ft by 9 ft;

• I mulch my land, which enables the coffee roots to penetrate;

• Fill the holes with manure mixed with topsoil up to the top;

• Wait until it rains to plant the seedlings;

• Using the recommended spray guide, coffee bushes are sprayed after 14 days, 21 days and 28 days, and afterwards, every month to ward off pests and diseases.

“I follow a strict spraying programme to control diseases. In September, I spray to control bacterial wilt, November-leaf rust, February-bacterial blight and between March and June Coffee Berry disease.” After a year, the coffee starts to flower. Soon the small coffee berries, or cherries begin to form clusters at the base of the leaves. After six or seven months, the coffee cherries are mature and ready for harvesting.

“I spend Ksh15, 000 on casual labourers during harvesting,” she says. Major pests include thrips, berry moth, antestia bug, yellow and white-headed borer, while diseases include; coffee leaf rust, fusarium wilt and coffee berry disease. Ms Nyawira has added 200 Batian and grafted Ruiru 11 varieties, which are resistant to diseases, on another quarter acre farm.

As she watches the glitter of the morning sun hit the wet leaves of her healthy coffee bushes, she does not regret going into farming and believes her future can only get brighter.