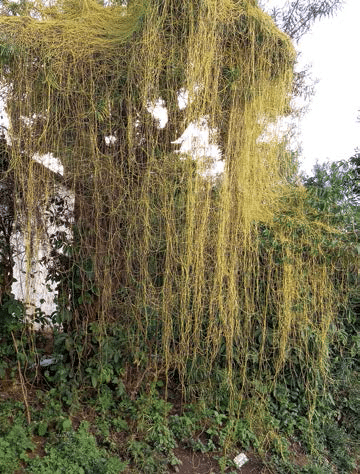 For a first-timer, the sight of the golden dodder plant arouses curiosity. The mellow-yellow plant comfortably wreathes itself around other plants, presenting a beautiful image.

What’s more, its tiny string-like strands form lovely hexagons around the host plant’s stems and leaves. It is a sight to behold, until you begin to realise that it is really a parasitic weed. It slowly but gradually sucks life out of its host plant.

Introduced to Kenya in 1963, the weed has taken that many years for its spread to begin to raise eyebrows. Many people did not know about it until it started spreading in the western Kenya counties. The mainly leafless killer weed at first struck this writer as some sort of natural, growing rope.

In the place of leaves, it has twining stems and tendrils with barely visible scales.

The plant, whose botanical name is cuscutacampestris, has yellow-topale- orange stems about 0.3mm in diameter. In its sapling stage, the stems do not twine and attach to the host, but rather produce tendrils that later coil around the host plant’s stem.

Another curious aspect of this plant is its germination and growth. The dodder plant is After germination, the seedling grows in a funny way.

Having only a rudimentary root for anchorage, its shoot circumnutates (swings round anti-clockwise). It continues to grow until it comes into contact with a stem or leaf of the host plant around which it coils itself. It then grows further, making new contacts and attachments.

Strangely, as the shoot grows, the rudimentary root below dies off, leaving the parasitic plant with no direct attachment to the soil.

Owing to this ability to gradually remove its own root, it is very hard for one to trace its growth point. This makes it hard to control it. As it grows, it also develops haustoria. These are hollow tissues that penetrate the vascular bundles of the host plant, enabling the parasite to suck the nutrients.

The weed produces seeds, which germinate into a shoot. It then attaches itself to the host plant quickly. This is because it has very low levels of chlorophyll and depends on the host for nutrition, which explains why the host plant weakens and eventually dies.

Once the dodder plant has fully attached itself to the host, it can cause serious havoc.

It can be spread through wind, animal and humans. The seeds can remain viable for more than three years and after being ingested, are said to maintain the ability to germinate for up to10 years.

A spot check by the Smart Farmer found that the parasitic plant attacks mainly trees, with some of the most vulnerable being the yellow oleander (thevetiaperuviana) and euphobiatrucalli.

The parasite sometimes attacks crops, and has on some coffee plantations been seen coiling itself around trees. There is scant knowledge on the herbicides to fight its spread though there has been concern among extension officers on the weed.

To ensure there are no new seedlings, one may have to remove all the plants that have already been attacked by the parasite. Another effective measure would be to plant trees that have been proven to be inhospitable to the dodder weed. These include grasses, lilies, crucifers, legumes, transplanted trees and certain shrubs.

Where the infestation is not widespread, removing the parasitic plant by hand can work. However, where expansive areas have been invaded by the harmful plant, mowing if down might be the only way out. Pruning and burning trees that have been attacked by the weed can also effectively get rid of it.

ALSO READ: Wild trees that are full of vitamins