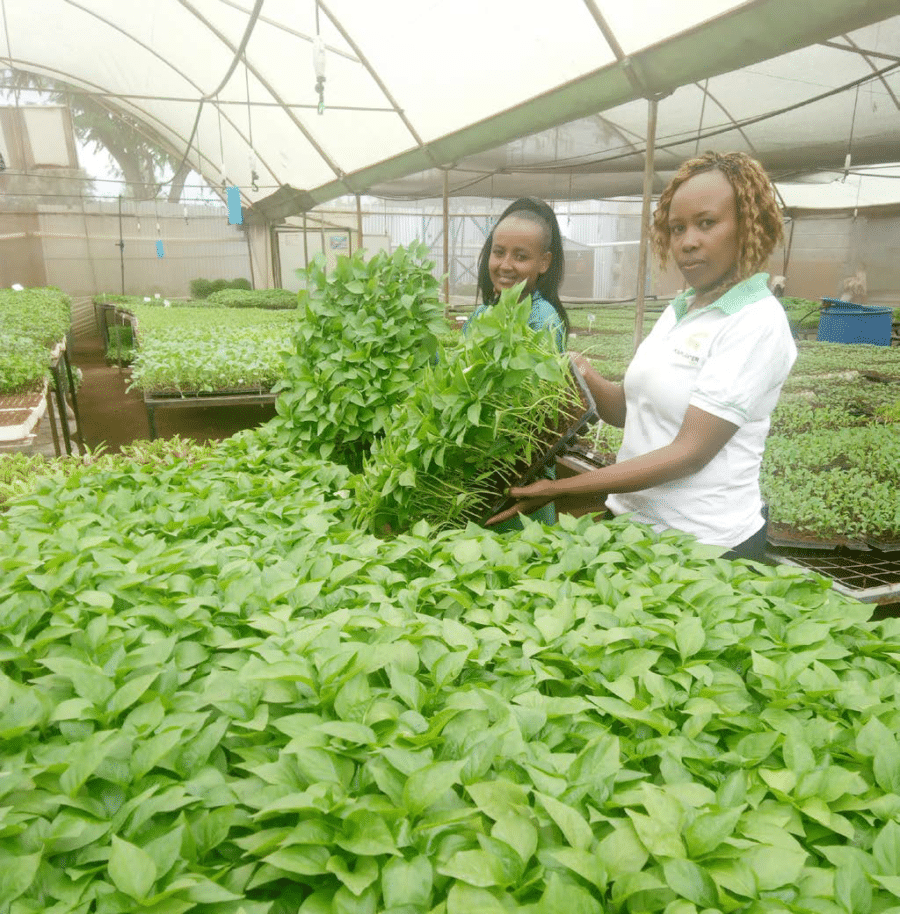 A seedling tray has multiple holes from 60, 100, 160, 200, 204 and 288 used to hold seeds from germination time until the transplanting stage. The trays may be plastic or made of high-quality polymer, high impact polystyrene (HIPS) and PVC, acrylonitrile-butadiene-styrene (ABS) and can be placed on stands made of metal or wood.

Carolyne Mwangi was deter­mined to make her 100 x 100 piece of land in Ruiru, Kimbo, in Kiambu County, more profitable.

“Despite being employed, I constantly felt the push to pursue a greater ambitions and in 2017, I decided it was time for me to get into self-employment,” says Ms Mwangi.

The move awakened her passion in agribusi­ness and unbeknown to her, would turn out to be the best way to change her fortunes.

She resigned, leased a quarter acre of land in Ruiru using her savings, and plunged into full-time crop farming.

She began growing passion fruits and vegeta­bles, but despite her best efforts, her expansion was slow, hampered by the poor germination of seeds that she planted. Three years down the line, her rate of growth was not as she had earlier anticipated.

At about the same time, Ms Mwangi got a notice to vacate her plot immediately. The owner wanted to develop the land and she had no idea what her next move would be. Her father, upon seeing her predicament, offered her a quarter acre piece of family land that was under subsist­ence farming, and this saved her day.

Down but not out, she put up her greenhouse again and began growing passion fruits and vege­tables. “I would plant in seedbeds on the ground only to lose a quarter of them. This frustrated me and slowed down my progress,” says Ms Mwangi.

While searching on the internet, she discov­ered that farmers in India were using seedling trays and achieving over 90 per cent germina­tion. “This was a great discovery for me and I ordered one tray from Amiran Kenya for trial. After seeing the impressive results, I adopted the technology completely. We now use them to propagate all our seedlings and 1 have seen the difference,” she adds.

Thanks to the trays, the survival rate of Ms Mwangi’s seedlings was almost 98 per cent, and they were strong and healthy, too. Her neigh­bours noticed her attractive seedlings and soon started buying from her.

“In 2014, I spotted a gap and established Kim­planter Seedlings & Nurseries, a seed raising business, on a 100×100 acre piece of land in Ruiru-Kimbo and began producing seedlings professionally.”

Today, she earns good returns and employs five workers. The investment provides for all her household expenses and pays her bills.

Her modest greenhouse holds about 2,000 seedling trays, which lie on metallic stands. With each tray holding 200 seeds, she has about 400,000 seedlings growing at any given time. Ms Mwangi, also the MD for Kimplanter, notes that one should classify one’s target market when venturing into propagation via seedling trays, that is whether for greenhouse or open field farming.

“The best growth conditions for seedlings propagated in trays is in a controlled environ­ment such as a greenhouse. This is due to the warmth, water, nutrients, careful seedling han­dling and pest-free environment synonymous with greenhouses,” she advises.

Seedlings receive better care and protection (from animals, weeds, and pests) in the nursery. At an early stage of development, most vegetable crops require special attention that is not possible in the main field.

Fewer seeds are used for raising seedlings in the nursery than when sowed directly in the field where seedlings often have to be thinned to one, which is wasteful.