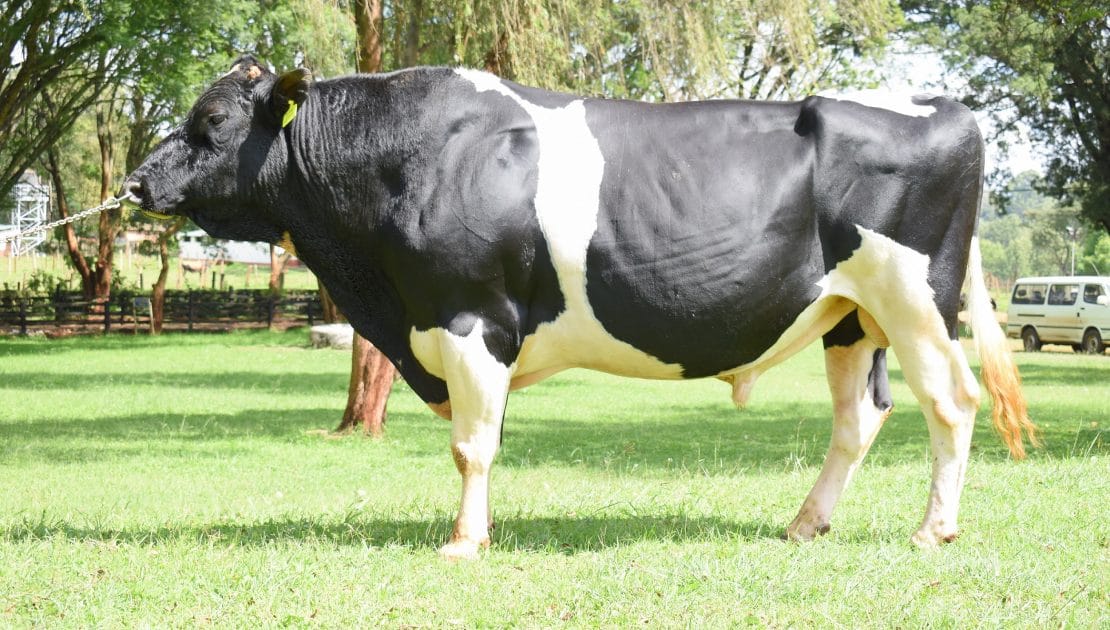 ET is a dairy breeding technology where proven genetically superior cows are assisted to produce several calves within a short period. It involves two processes:

Moet involves the use of fertility hormones, which are injected into the selected animals in a way that instead of a single egg being released from an ovary, several eggs are released at ago.

The animals are served through AI when they are on heat, but instead of the multiple embryos (fertilized eggs) developing within the cows as twins and multiples, they are removed in a process called flushing or harvesting.

They are then transferred to previously prepared animals (synchronized surrogates or recipients) to carry them to term.

In IVEP, ova (unfertilized eggs) are collected from the cow and then matured in a laboratory where fertilisation and incubation of the embryos take place for seven days before being transferred to prepared surrogates.

Why use ET technology?

As quality dairy animals become rare due to the difficulty involved in breeding, a different way to breed other than AI has had to be sought.

While AI allows for improvement of animals using sire (bull) genetics, long periods of faithful use of the technology is required for significant impact to be achieved. This also assumes that deliberate efforts were made to select the right bulls to match the cows at all times.

With AI, farmers take between 10 to 15 years to develop the right quality genetics capable of a peak daily production of over 50kgs per day. This is a tall order for many farmers. However, embryo transfer allows these animals to be placed in farmers hands in less than three years.

For a start, quality donor animals capable of the targeted production, are picked. These are then bred with the best bull semen available with the aim of obtaining superior offspring.

In the two processes, many embryos are obtained at every session, which are then transferred to surrogates to carry them to term. However, like most technologies, ET comes with its own challenges.

First and foremost is the investment associated with the process. Whereas AI can cost a farmer somewhere between Ksh1,000 and Ksh5,000 on average, ET can cost between Ksh20,000 and Ksh50,000 per animal. In addition, the conception rate stands lower than AI at 50 per cent, compared to 70 per cent in normal AI situations.

However, in spite of the high costs and low conception, ET technology is still considered value for money, since it allows dairy breeders all over the world to make great genetic leaps than was previously possible.

ET also allows the multiplication and sales of high-end genetics, which would otherwise not be available for sale. Animals for sale in many breeding herds tend to be lower producing animals, as farms retain their best for breeding.

In some cases, whole herds of quality elite stocks have been developed from scratch, using the technology. It is specifically the quality animals being produced, which makes the investment worthwhile for the farmers and investors who choose to use the technology.

Stations all over the world also use the technology to produce quality bulls for their stations, from which the best performers can be recruited, a case of finding the best from the best.

ADC Livestock Genetics Centre (ADCLGC) and KAGRC for example have a number of bulls born out of ET programmes. To make the technology more affordable to farmers, government, development partners, research organisations, and private sector actors including farmers, can join hands to ensure that it gains the highest possible uptake.

This is aimed at driving costs to as low as possible, while allowing higher levels of proficiency to be reached with ET technical personnel.

With the technology, farmers need not pay the high cost of the quality breeding heifers from the breeder farmers. The technology, with good support and good breeding programmes, can allow many farmers to acquire quality animals at a much lower cost.

Since boran crosses and even the small East African zebu can be used as surrogates, no farmer need be left out for lack of animals to serve as surrogates, since they can use any heifers that they have. All that is required is an arrangement that will see farmers work together to subsidise the cost of the service.

A revolving fund with subsidized loans can help farmers access the technology at a reasonable scale. Assisted by farmers’own chamas(groups) or cooperatives, the subsidy can be stretched considerably.

This can also be given a mobile twist so that farmers can register on an ICT platform. This would enable better coordination of registration and roll out of ET programmes. For these efforts to succeed, goodwill by the national and county governments, will be necessary to assist in coordination.

The cost of infrastructure associated with the technology has also been the other big challenge.

The equipment, especially for IVEP is high, considering that specialized lab equipment and materials are required for the process. More recently, however, a private entity Invitro-cow has set up lab facilities for ET, and is in the process of rolling out the service.

The success rate in conception could be enhanced with continued usage by farmers, the more reason to create a subsidy fund for the farmers to enable more of them to use the service. Increased use in addition to insurance, would see the number of people using ET increase, which would also reduce the costs to sustainable levels.

The success of Kenya in many technological fields more recently, should serve as motivation that if enough effort is placed on making ET as common practice as artificial insemination, the country can take the quantum leap and take back its position as a dairy giant, standing tall once more, among other countries not only in Africa but also in the rest of the world.

In the process, the myth that Kenyan farmers are doomed to oblivion by low pricing animals, will disappear as a mirage. More farmers will have quality producing animals in their herds.

If the country takes advantage of mobile technology to address the existing management, finance, veterinary and feed related issues, many farmers will have been assisted to overcome the other barriers that were previously thought to be too difficult for them, and in the process, make keeping of quality productive animals a common place practice among them.