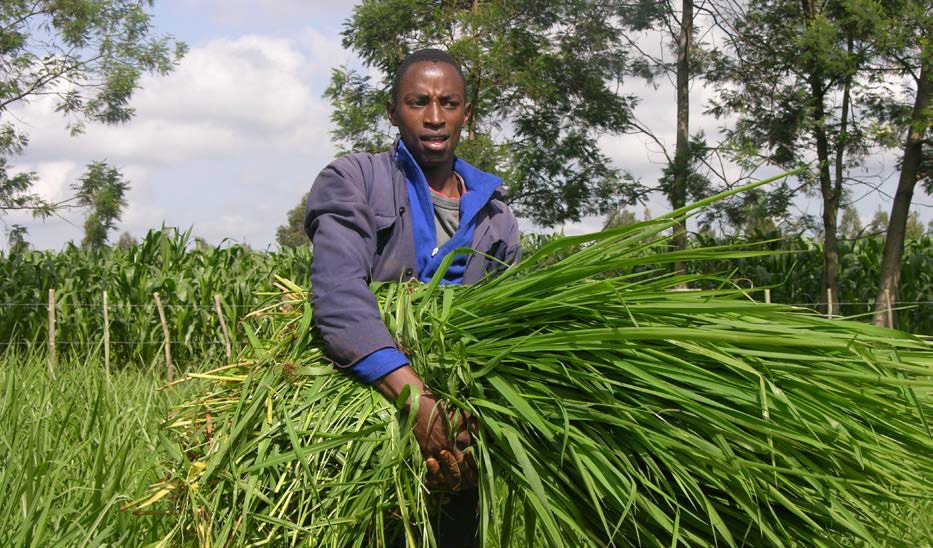 Indigenous dairy cows and crosses have lower milk production, yield­ing between one and10 liters daily compared to exotic breeds such as Friesians and Jerseys that produce more than 30 liters.

However, in Eldoret, Mr John Magut, who jokingly refers to his 100 herd of dairy cows as bush cows, is happy because his crosses produce between 19 and 20 liters of milk daily. He sells a liter at Ksh50 or Ksh60 earning an average Ksh40,000 daily – a handsome return for the 64-year-old farmer from his 40 cows.

After leaving formal employment in 1992, the father of five, who later consulted for some big dairy farmers, decided to follow his dream of becoming one. He bought land that already had a dairy and a cooling facility, renovated it, and brought in 19 local dairy cows and a few red and white Freshian heifers.

“I started with 19 crosses and a few other cows. I would milk the 19 and get  30 litres in total daily, selling at between Ksh30 and Ksh34. This averaged less than two litres per cow,” the farmer says.

He would later start a rigorous breeding pro­gramme to increase his stock.

“Today, my animals produce an average of 20 litres each,” he told Smart Farmer magazine.

In 2016, Mr Magut first heard about the grass and decided to give it a try. “I did not know about the grass until I received a call from a friend in South Africa, who had wondered whether it was available in Kenya,” Mr Magut recalls.

A year later, he attended the Chepkoilel Trade Fair Show and found the Mulato and Piata va­rieties being exhibited by the Kenya Agriculture Research Organisation (Kalro).

He planted the splits on a small plot of land on a trial basis, and was impressed by the increase in milk production whenever he fed his cows.

He grew Mulato I and II, Piata and Cayman on one acre and has never looked back since.

Though he grows different types of pasture that is rich in protein, including Boma Rhodes, desmodium and maize fodder, brachiaria is his favourite. The grass, which he grows on three-and-a- half acres, has tremendously increased his milk production.

Brachiaria grass is highly nutritious and boosts milk production by 15 per cent to 40 per cent. It is not only hardy and easy to digest, but also has a crude protein content of 15 percent, plus other minerals that are necessary for milk production such as phosphorus and calcium.

Mr Magut plants the Mulato I & II, Piata, Xaraes, Cayman, Cobra and Basilik varieties. Research carried out by the International Cen­tre for Tropical Agriculture (CIAT) in October  2016, to map out the potential benefits of the grass in East Africa, found that farmers could produce 15 to 40 percent more milk by using the drought-tolerant grass.

Brachiaria can sequestrate carbon dioxide from the air and store it in the soil. It inhibits loss of nitrous oxide from the soil, thus reducing global warming, and since it is highly digestible, ani­mals feeding on it do not emit much methane.

Mr Magut, who sells his milk to New KCC, hotels, and schools within the town, said that giving animals balanced feed both in nutrients and quantity ensures good milk production all-year round. Heifers and calves need relatively high levels of crude proteins to support muscle growth.

When baled too at small squares with a di­mension of 36cm to 40 cm long by 18cm wide by 18cm tall, bracharia grass weighs 20 kilograms while Boma Rhodes weighs 13 kilogrammes. Bracharia is also higher in biomass per unit area compared to other grasses.

According to a study conducted in 2012, the grass is good for the environment as it is easily digested by cows. Better digestion, the reserve, means reduced emission of methane, which is a potent greenhouse gas.

The roots, too, are deep, and hence able to soak up more carbon than other grasses and helps to curb global warming.

To beat the changing weather patterns, he grows feed on the farm at different stages for continuous supply.

“When farmers suffered due to lack of feed during the prolonged drought early this year, I had hundreds of tonnes of silage and hay. Many lorries used to line up here for milk collection,” he notes, adding that dairy cows need to be fed all the time, and in all seasons for good returns”

The dairy farm uses technology to boost milk production. Intelligent dairy assessor (AID), a device with sensors that detect whatever is hap­pening to a cow’s body. It is put around a cow’s neck and detects whether the animal is sick, on heat, eating or sleeping. It then relays the message to Mr Magut’s phone or his computer.

“We have named the cows and this makes it easy to monitor their performance and health. The technology allows us to capture and record livestock data to improve yields and profitability,” he said. There is potential in dairy farming. What farmers need to do, he notes, is “to organise and equip themselves with the latest technology to increase production”.

“As dairy farmers, we have to embrace smart technology to avoid gambling when it comes to milk production,” he explains.

Although he lacks superior genetics in his breed­ing programme, the farmer boasts of thriving in passion and knowledge in dairy farming to achieve his unrivaled milk productivity.

“I benchmark and link up a lot with countries that have excelled in the dairy sector. I also tour other successful farmers,” says the farmer.

Mr Magut has a solar water pumping sys­tem for watering his animals and crops during drought. He also farms and sells vegetables and feeds the excess to his animals.

Though dairy production is lucrative, fluctua­tions in milk prices are a major challenge for farmers. High taxation on animal feeds is also a big obstacle.

Some millers also make poor quality feeds and sell them to unsuspecting farmers.

“The government also needs to lend a hand by tackling input and marketing challenges facing the farmers,” Mr Magut says.

And with this window of opportunity, he has set his sights on making some extra money from the grass.

“I will soon start selling the bracharia bales at between a Sh500-Sh600.”

“Having concentrated on growing maize, pas­ture for hay and silage, my production cost is always very low,” he adds. And through linkages, he’s learned how to produce more.

“We also balance the feeds according to the ratio from dairy nutrition firms and this has en­abled us to get it right in feeding our cows and also save on cost.”

What the future holds

Currently, the farm has very good genetic traits of heifers, “And very soon they will be no longer ‘bush cows’. My prayer is for them to produce an average of 30 litres per day and with time I foresee even more,” he says.

For better yields, the soil where the grass will be planted should first be tested to determine the pH. Bracharia grows in well-drained soils of medium to high fertility with a pH of 5-8.

“Bracharia grass does not always do well in any type of soil. Testing is crucial to determine the variety to plant and in which soil conditions.”

Mr Magut prefers growing splits because they are cheaper and grow faster. A kilo of bracharia goes at Ksh6,000, and the imported type retails at Sh5, 000.

Use farmyard manure during top-dressing. And a month or two, the grass reaches 3 feet high, ready to feed to the animals. Then after every two months, a farmer continues to harvest the grass, and can live as long as 10 years. Anoth­er advantage of the grass is the average dry mat­ter yield ranges from 10 to 40 tonnes per hectare depending on soils, rainfall and management.

It is also advisable to harvest shortly before the grass is fully mature as this is the time they have high nutrients.