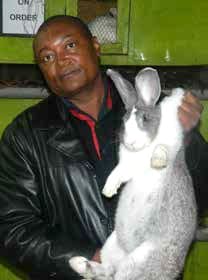 Rabbit rearing is the latest farming craze, as it stakes its claim to its rightful place in the lucrative agribusiness enterprise.

However, all is not so rosy, as some farmers are finding out. They have lost their animals to diseases, while the subject of feeds is a rather complex one.

Rabbits need care and concern, and just like any other business, to achieve maximum production; everything has to be done by the book.

Before you even purchase any breeding stock, you need to seek expert information on how to take care of rabbits.

Rabbit care accounts for 80 per cent of the success in this business, says Alcare Kenya Limited CEO George Kibanya. “You may have the best breed, but unlike human beings, rabbits cannot take care of themselves.

Utmost care must be taken if you do not want to be depressed with heavy losses,” says Mr Kibanya. “Rabbit care includes the building of hutches, handling nutrition and day-to-day activities on the farm,” he adds.

For any agri-business venture to run smoothly, close supervision by the proprietor is not an option. You need to be a-hands-on, and not a telephone or absentee farmer.

“How will you know that an accident has occurred if you are not on the farm?

How will you know that a mother has turned cannibalistic and is eating the bunnies if you are not on the farm?

How will you know that your rabbits are sick?” Mr Kibanya poses.

“Your closeness to your animals is the biggest advantage you may have to maximise gains from commercial rabbit farming,” he says.

Many farmers fail because they are not available to oversee the care given to their animals and rely on their caretaker most of the time for updates.

“You will entrust them with your business, and initially, things may seem fine, but eventually they will go wrong. Some will start by giving you the numbers of how many animals have died and more problems. As the proprietor, you are at a position to carefully monitor their behaviour because it is your investment. Employees can look after the animals, but frequent visits are essential,” Mr Kibanya advises.

The money in rabbits is in their weight and volumes.

How will you know whether your rabbits are accumulating good weight in time? The least expected weight of a mature rabbit in commercial farming is three kilos.

“To attain good weight and manage diseases, proper feeding is key. The way you feed your rabbits eliminates diseases by 80 per cent,” he says.

Do not overfeed or underfeed the animals. Also, avoid using one kind of feed throughout.

He has encountered farmers who feed their bunnies on pellets alone because they are not a “local” breed. Some think that because the pellets are expensive, that is all the rabbits need to grow healthy and to attain the preferred weight.

“That is a wrong perception. You must supplement the pellets with other feeds such as vegetables,” he explains. Apart from feeds, water intake is also essential and supply should be minimised during rainy seasons.

Rabbits can withstand diverse climatic conditions. However, to curb unforeseen risks, precautionary measures must be taken to control temperatures.

“If you intend to breed them in cold regions, the cages should be built up to three quarters closed.

During the night use curtains or sacks to cover the open spaces to avoid the excess cold.

In warm areas of 24 degrees Celsius and above, ensure the cages are three quarters opened and a quarter closed for privacy,” says Mr Kibanya.

General handling since the days when rabbit keeping was considered a hobby for boys, many people have been holding them by the ears.

Today, some ignorant and uninformed commercial rabbit farmers still do the same.

Holding them by the ears is a heartless practice. Mr George Chiragu, a youthful rabbit farmer, says the rabbits will kick around in discomfort if held by the ears.

“They will be trying to pass a message that they are in pain, and in the process, might even scratch you,” he says. Imagine being held by the ears! The pain that you feel is nothing compared to what rabbits suffer when held by the ears.

A rabbit should be held by the scruff (the space behind the back of the head and the beginning of the spinal cord) while being supported by another hand from the hind, the Alcare Kenya CEO advises.

Problems associated with holding them by the ears include bacterial infections and ear canker (a painful and irritating condition).

If this condition is not controlled, the ears will sag (tend to fall), forcing the rabbit to turn and maintain its head at a certain angle and eventually, death comes calling.

“In the process of kicking, they can break their spinal cord upon which they will get terminally ill and eventually succumb to death,” Mr Kibanya warns.

Do your rabbits produce sound? Rabbits rarely produce sound. But the few times they do is when they are about to die or are in danger.

Sometimes they do it when the male is serving the female.

“When the female is sitting in an awkward position not to be served well, the male kicks the cage while producing some noise to scare the female to think it is in danger. It will then move into the right position to be served well. When they see a predator like a dog, they will start to kick the cages, an indicator of imminent danger,” he says.

Read more and how farmers in Murang’a county are rearing commercial rabbits, all in Issue 21 of Smartfarmer Magazine Here