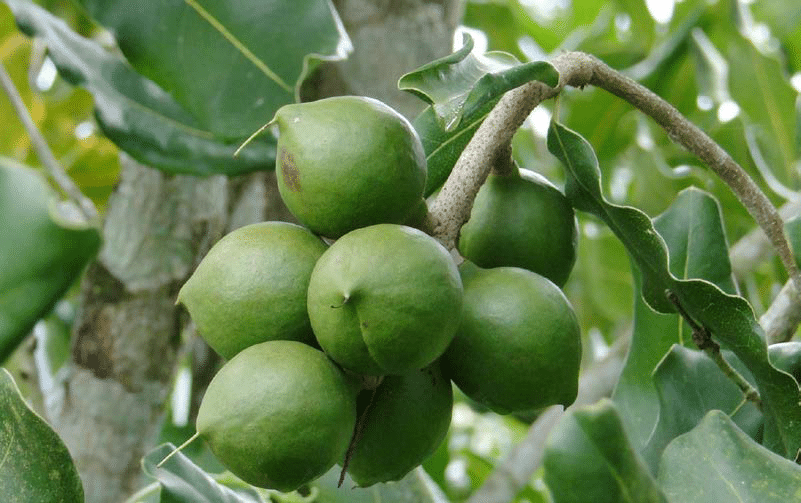 Unlike most cash crops, the nut-bearing tree is environmentally resilient, hardy and is adapted to lower regions. The macadamia tree is native to Australia and was first introduced to Kenya in 1946 by Bob Harris. Kenya Agricultural & Livestock Research Organization evaluated some select clones in various agro-ecological zones and found the nuts widely adaptable in the highlands and midlands. and lower eastern regions for example Machakos and Taita Taveta. The introduction of improved varieties of the crop has also been instrumental in the success of macadamia in the country

Macadamia is as precious as gold in the world of nuts. By 2011, only a few people knew that it was grown in Kenya. In fact, Ksh60 for a kilo was considered a favourable price, considering that just a few years back the nuts were retailing for Ksh30 a kilo.

“We came to regard macadamia nuts as merely for young boys and rodents,” says Felix Kibira Ikamba, a farmer in Gakindu, Mukurwe-ini constituency in Nyeri County.

Mr Kibira’s father, Wilson Ikamba, a former chief was one of the first macadamia farmers in the region. He had been sold the idea by an agricultural officer tasked with convincing farmers to plant coffee in 1964. Macadamia will do well just as your coffee will, the officer said.

The chief hived a quarter acre for the nut tree. The trees grew and flourished and for some time the money was good. Farmers in the area followed suit.

But the windfall did not last long; by the late ‘70s, the pay had grown so thin that farmers began cutting down the trees.

The trees the old chief planted remain. But, as Mr Kibira told me, the trees held little appeal; he wouldn’t cut them down neither would he expend his energy on them. But then prices shot.

“We got brokers, and everyone coming to buy the macadamia,” he says. “Last season, a kilo was going for Ksh140. But I only harvested about 500kg; I could have done better”. He adds that he has taken to pruning and other crop husbandry practices with an eye for more returns.

In the previous years, farmers planted macadamia trees to provide shade for coffee bushes that produce high-quality coffee. However, today, some coffee farmers have switched to farming macadamia nuts due to the fact that the price has more than doubled

Now, macadamia is becoming the new gold on the farm, with the crop retailing between Ksh150 to Ksh200. High global demand for the crop has led to a local mad rush to grow it; the revival of forgotten trees and, the theft of nuts on the farm.

According to agronomists, a well-tended crop produces between 70kgs to 150kgs per tree per year. An acre holds between 71-75 trees depending on the spacing between the trees.

This means that a farmer is set to harvest, when all things remain constant, and average of 4,970kgs per acre for 71 trees and 70 kilos per tree. At the cost of Ksh150, this means the farmer can earn about Ksh745,500, pointing to the reason for the mad rush and thefts.

Today, few farmers are willing to talk about their crops, lest they set the thieves upon themselves.

So bad had the situation become in 2017 that when the husks of Joseph Wanjohi’s macadamia crop began to split in October, signaling readiness for harvesting, he hired guards to keep watch over his farm in Kamune village in Murang’a every night. His extraordinary decision was occasioned by a spate of incidents that had occurred during the year.

There had been cases of macadamia nuts theft in the area, with gangs pillaging entire crops at night. The previous year, a neighbouring farmer had woken up to a shocking sight: branches that had sagged with ripe macadamia nuts only a day ago, now stood barren. The farmer had lost a crop worth about Ksh250,000 overnight. “I had invested a lot in the farm, and the idea that I could lose it all was terrifying,” says Mr Wanjohi.

“The only way I could guarantee returns was to ward off illegal harvesting,” he adds. That a farmer had to hire guards to secure his crops points to developments that have occurred in the past few years or so.

After so many years of barrenness and meager returns, production of the nuts has increased tremendously in the last decade from about 11,000 metric tonnes in 2009 to over 41,000 metric tonnes and 30 processors today, making Kenya the number three producer in the world, after South Africa and Australia.

South Africa is currently the world leader in macadamia production with 54,000 MT tonnes in-shell produced this year. Followed by Australia at 44,500 and Kenya. Kenya overtook the USA in 2013 and has continued holding the spot.

The world’s largest consumers of macadamia nuts are Australia and North America. They account for about 50 per cent cwonsumption of the produce.

The farms currently produce an estimated 41,000 tonnes in-shell nuts, constituting about 20 per cent of global supply. And as demand continues, Kenya’s production is expected to increase as farmers shift to the cash crop across the country. The current saplings in the field will also mature in the coming years, boosting production. The global market is expected to see a 50 per cent rise in crop production in the next five years.

According to a global macadamia market report, the macademia market is projected to grow strongly throughout the forecast period from 2018 up to 2025. This is good news for the Kenyan farmer, who can stake a claim at this lucrative market.

According to Green & Gold Macadamias, one of the largest marketers of processed macadamias in the world, global growth and demand for macadamias has been outstanding and has seen a rise of exports around the world by 112 per cent in the last 10 years.

Researchers expect the global macadamia market that was valued at around USD2.99 billion in 2017 to grow to about USD4.5 billion by 2024.

But what is driving up this demand?

A growing demand for natural-(plant)-based cosmetics and food products by an equally growing number of health conscious consumers is driving demand for macadamia nuts.

Coupled with this, a growing middle class in countries such as Iran and Egypt are driving demand for consumption of the nuts which are eaten as roasted nuts, organic nuts, salted nuts, and chocolate covered nuts among others.

They are also used to produce desserts, cookies, chocolates, and cakes among others. In the cosmetics industry, macadamia is used to make natural and organic products. It is valued for its anti-aging and hydrating and moisturizing properties.

The oil of macadamia is said to be volatile, with a high content of oleic acid and palmitoleic acid. This makes it suitable for sun care creams and body lotions.

Macadamia nuts are also said to possess anti-inflammatory, antimicrobial, and antioxidant properties. They also contain a wide range of healthy nutrients such as protein, carbohydrates, niacin, thiamin, iron, riboflavin, and vitamin A.

Kenyan nuts are popular due to their crunchy nature